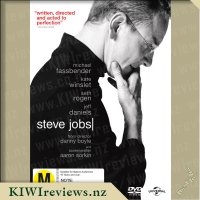 With public anticipation running high, Apple Inc. co-founders Steve Jobs (Michael Fassbender) and Steve "Woz" Wozniak get ready to unveil the first Macintosh in 1984. Jobs must also deal with personal issues related to ex-girlfriend Chrisann Brennan and their young daughter Lisa. Eventually fired, Jobs launches NeXT Inc. and prepares to release a new computer model in 1988. Ten years later, Jobs is back at Apple Inc. and about to revolutionize the industry once again with the iMac. Apple's rise to popularity and the enviable successful launches of product after product made CEO Steve Jobs the stuff of legends; and enough mystery surrounding him to make him into a myth. Rumours here and there, but who knew what the actual story was. This film is one of two 'Steve'Jobs' moves that came out around the same time (the other named 'Jobs' starring Ashton Kutcher), and this was the one that had the blessing of several of the key people that were involved in the events/companies, which is important for a biographical film, as it adds to the credibility of it.

The actual film follows the events leading up to three product launches; that of the Macintosh, the Next Black Cube, and the iMac. The layout of which really confused me. I know that some of the people that would watch the film would be aware of how the launch for each product went, but I myself haven't seen them. So to seeing the behind the scenes before the launch, seeing "Steve Jobs" walk out on stage, and then skipping forward, and giving a montage of the resulting events after the launch, well it created disconnections. I really would have loved to have seen the highlights of it (perhaps even snapshots of real footage). So the film had a lot of fill in the blanks moments, as you spend a third of the film building up to a climax, then skipping it and starting again. Rather tumultuous.

That being said I still enjoyed the film. Watching this portrayal of a "real" person and visualising the flaws of the man, as well as the his neverending journey towards his vision, it was eye-opening. Personally I'm not a fan of Apple. I hate their closed system, so it was really interesting to see the infighting that revolved around that exact point. Michael Fassbender pulled off an exemplary performance, in that I wasn't picturing Magneto working at a tech company, instead I saw Steve Jobs (I do sometimes struggle to see actors as anything other than their most convincing performance). Seth Rogen was a little bit annoying, but this is by far my favourite role from him so far. While irritating and repetitive, he still was a grounding character that showed the complete disparity between the co-founders. Kate Winslet took her character's role so seriously that I didn't even realise if was her until I was listing this review.

So it was an eye-opener, and for a man that enjoys his Samsung products, I took great enjoyment from seeing the flaws of Steve Jobs on prominent display for all to see. Despite the overuse of montages and skipping over the parts that we build up to, I still thoroughly enjoyed the film. And I think you will to.

If someone took everything you live for..how far would you go to get it back?

Flying at 37,000 feet in a state-of-the art aircraft, Kyle Pratt's six-year-old daughter Julia vanishes without a trace. Or did she? No one on the plane believes Julia was ever onboard. And now Kyle, desperate and alone and fighting for ... more...