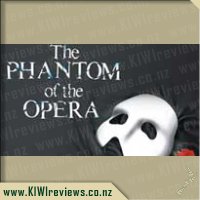 The Phantom, at last, comes to Taranaki

Far beneath the majesty and splendour of the Paris Opera House, hides the Phantom in a shadowy existence. Shamed by his physical appearance and feared by all, the love he holds for his beautiful protegee Christine Daae is so strong that even her heart cannot resist.

Directed by Warren Bates, it is one of the most anticipated productions in decades and is likely to be a sell-out. Book early to avoid disappointment for this spectacle of musical theatre. For more information head to our website.

Tickets on sale from 20 November 2013 from Ticketmaster.

There is nothing more powerful than sitting in an audience listening to the beat of the drum, organ playing, violins strumming The Phantom of The Opera in the dark. I had goosebumps as the orchestra belted out the famous tune. I didn't know whether to cry and found breathing very hard.

I LOVE the Phantom of the Opera, having own the DVD which I have watched a lot I could not wait to see New Plymouth's adaptation. It cost the New Plymouth Operatic Society over $600,000 to bring the set alone here and talk has been buzzing since before Christmas. Tickets were a Christmas present from my husband and I have been counting down the days.

Maybe because I had so much expectations, or maybe its because I love the DVD so much, but I was not blown away as much as I thought I would be. There were moments were I forgot where I was and totally mesmerised by the stage but other times I found my mind wandering. I loved the actual Phantom of the Opera song done in pitch black and all you saw was dry ice woffling on the ground and then the boat emerged it was amazing. The audience was completely transfixed. But the end 'Past the Point of No Return' is what I was dying to see when Christine, The Phantom and Raoul all sing together, I could not contain my excitement, but, when it happened I was not left as emotional as I thought I might - it was just flat.

The stage set was awesome and the scene on the roof top with the dome is just beautiful with the twinkling stars. The singing was out of the world and the Phantom and Raoul voices were so impressive, my husband even commented he did not realise there was so much talent in New Plymouth. But, I did find when a group of them song together it was difficult to hear over the music, the louder they song the louder the music got.

We were both left impressed by the performance, and appreciate how much time and effort has gone into the production and can agree it is by far one of the better performances we have both seen but the lump in my throat did not last from the opening of the curtain.

You've Never Seen The Bard This Bad-Ass!
Think Ophelia as a robot, King Duncan being greeted with a hand grenade, Yorick as a zombie, and you've got HAMLET: The Video Game (The Stage Show).