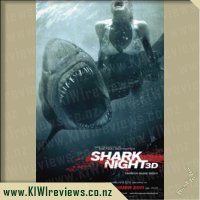 When 7 college friends pack their swim suits for a weekend of fun-in-the-sun activities at their friend Sara's lake house, they think it will be the perfect vacation. But the tables immediately turn when the lead football star, Malik, gets his arm ripped off during a water skiing accident.

While the friends are to believe his wound was a freak accident, they soon come to discover that there was a primal attack involving a shark. Now while they think that one shark is no problem, they soon come to the realization that 15 species of sharks are lurking in the water, and with no form of boat or transportation, and no signals for phones, the group of seven now face a fate they would never imagine. Being fed to these sharks by crooks for real life footage on an Internet website

I find sharks fascinating the way they can glide so effortlessly through the water one moment and within a blink of an eye be the most terrifying death machine. When I was younger I wanted to be a Marine Biologist who focused purely on sharks, but that dream dyed pretty fast after I found out they mainly focused on plants. My bucket list is to swim with the Great White preferably in South Africa.

I put this movie in the thriller section but really I wanted to put under the comedy area this movie is so funny the scene with the jet skis, I laughed so much I had tears in my eyes. I replayed that scene so many times and it doesn't get old. The shark attacks are fantastic, extremely funny and worth a watch. The story is extremely silly about two hillbillies who after watching shark week a tad too much come to the realisation they could be rich if they film sharks attacking. (Mind you to be honest, I would probably watch that.) When a group of college students come to stay one by one they are met with fantastic ends.

I did actually learn something with this movie, I had never heard of the "Cookie Cutter Shark." He is a mean little thing with all of his friends, you would not want to meet one of these in the water, or be thrown in to a pool full of them. This movie would be great to see in 3D especially with the Tiger Shark, but even in normal 2 dimension it is very easy viewable. The acting is not oscar worthy but with what can you expect about a movie of sharks.

On a side note if you ask a bad guy 'why you are doing this' and he ends up explaining you are almost guaranteed that you will survive to the end and the bad dude is about to meet his end.