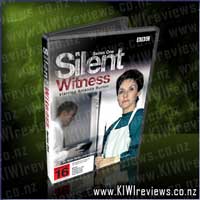 Forensic Pathologist Dr Sam Ryan, has an all-embracing, passionate notion of justice. Driven, almost obsessional, her crusade and tenacity sometimes leads her to conduct her own enquiries outside the laboratory, uncovering new evidence that dramatically alters the course of police investigations. This can lead to trouble - both in her personal and professional lives - but to Sam, each dead body deserves nothing but the truth.

Buried Lies:
Sam's examination of the body of a six-year-old girl, who is thought to have fallen from a rope-swing over a river and drowned, suggests a different cause of death.

Long Days, Short Nights:
Police are convinced they have arrested the right man for a gruesome ritual killing. Sam isn't so sure, but can she provide the proof?

Darkness Visible:
A death in police custody looks like an open and shut case with the dead man's cell-mate in the frame. But the station is eager to avoid any suggestion of a cover-up...

Sins Of The Fathers:
When a charred body is found in a burnt out Vietnamese restaurant, Sam is called to establish whether it is murder or a tragedy. It is a case that affects her more deeply than she would ever have guessed.

This is a great idea to bring the Silent Witness series to DVD. I used to love watching it on tv, however since it was the first series, I wasn't allowed up to watch it a lot since I was only a teen, and it was on rather late! The first series includes 4 episodes (all in two parts) and totals 7 and a half hours of viewing time.

Sam Ryan, who is played by Amanda Burton, is a forensic pathologist. It's her job to figure out why the victim has died, and what killed them. As Sam can have a different view than the police on how the person was killed, she often puts herself in the investigation so she can find out the truth. By doing this, Sam often puts herself in the line of fire from disgruntled members of the public.

During the series we also learn about Sam's personal life as well as professional life. We find out about Sam's upbringing, and learn how her father was killed some 20yrs ago, and the pain and grief that it has caused her family. I think the balance of Sam's personal and professional life was great, as it's nice to get to know the main character just that little bit better.

The only irritating thing I found in this series is the fact that the phone kept ringing and ringing whilst the police were doing interviews. I mean come on, silence can be wonderful!

This has definitely made me want to get the next series on DVD. In my opinion it will become a classic especially for crime lovers.

Featuring six classic Clarkson Specials from 1996 - 2002, this collection is an absolute automotive feast.

See Clarkson unleashed as he is sent on a mission to find the best and worst cars ever made, puts some of the most outrageously fast cars ever built through their paces, takes driving lessons to new and uncharted heights, and puts Japanese silicone wizardry to the test against European style.