Alvin and The Chipmunks review 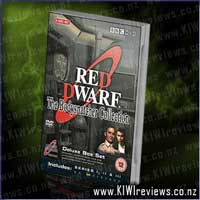 Disclosure StatementFULL DISCLOSURE: A number of units of this product have, at some time, been supplied to KIWIreviews by the company for the purposes of unbiased, independent reviews. No fee was accepted by KIWIreviews or the reviewers themselves - these are genuine, unpaid consumer reviews.
Available:
June 2008

A host of brand new extras also feature writer, director and crew commentaries, rare unseen footage, and in-depth episode documentaries featuring over 20 members of cast and crew, including (for the first time on a Dwarf DVD) exclusive contributions from rarely-seen Red Dwarf co-creator Rob Grant. However the hidden gem in this collection is the never-seen-before Red Dwarf I episode 'Bodysnatcher'. Intended to be filmed in 1987 the script was finally completed in 2007, uniting stellar writing duo Rob Grant and Doug Naylor for the first time in 14 years. This episode is in the form of storyboards with a unique vocal performance by Chris Barrie. Recorded exclusively for the DVD with atmospheric sound and music, Chris perfectly portrays an entire cast of characters, creating an episode that the writers consider "one of the best of all the early series".

Making its debut in February 1988, Red Dwarf sustained its success for over a decade with 8 massively popular and top-rated series, and won numerous awards including four Royal Television Society Awards for Special Effects and Lighting, the British Science Fiction Award for Best Dramatic Presentation, A British Comedy Award for Best Sit-Com as well as an International Emmy. This out-of-this-world DVD is packed with the following extras:
•  6 episode commentaries
•  four bonus commentaries
•  promo and effects reels
•  Easter eggs
•  "What's Different?" text track detailing the remastering changes, and occasionally making fun of them.

If you are a Dwarfer then this has to be something you have in your collection. Not only is it a never before seen episode (albeit in a storyboard/animatic style) but it is also the first 3 series Remastered (Remastered not only means improved sound and visual quality, but in this instance it also means some new special effects), now the new special effects are not on par with any of Weta Digitals, or ILM's work, but when it comes to Red Dwarf you don't need the effects to be perfect, I mean it wouldn't be Red Dwarf if they were.

The new episode was apparently to be the second episode of the first season, but for whatever reason it was dropped and parts of it became another show later in the season, but now Rob Grant and Doug Naylor decided to release the Bodysnatcher episode.

Now while you might think it's unique to do an episode as an animatic, it's not as unusual as one might think with this having been done to great effect in Doctor Who - The Invasion to replace two of the episode to which the original video footage had gone missing. And although the animation is only storyboard sketches as opposed to the more polished animation used in Doctor Who I still feel it has the same brilliant effect here in Bodysnatcher. However what is unique is the fact the all the characters in Bodysnatcher are voiced by the immensely talented Chris Barrie, who I feel manages to do wonderful impersonations of the original talented cast.

Another wonderful thing about this is the inclusion of The End : Original Assembly which is what was originally filmed as the pilot episode, but was then stripped down and two thirds of it were reshot, and after seeing the original cut I can see why, and in my opinion if they had gone with the original cut, I don't know if Red Dwarf would have ever gotten past the first episode.

Dave, a 24-year-old ordinary kiwi slacker, finds his life turned upside down when he meets the girl of his dreams - Cara - and her three kids. Step Dave is a light-hearted, feel-good family drama which demonstrates one of the realities of modern life - that families come in all different shapes and sizes.