« I Wish I Could Dance review

That's Not My Lion... review 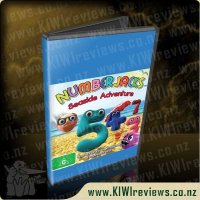 The Numberjacks is all about excitement, fun and learning, thinking skills, problem solving and maths. The series is aimed at helping four to six year old children to develop early maths skills, knowledge and understanding.

Seaside Adventure includes 45-minutes of fun, adventure and learning at the British Seaside. It features all the Numberjacks in a highly exciting and entertaining battle to outwit all five of the Meanies. 3's escape from the Shape Japer's cave will have children everywhere breathless with excitement. The episodes Into The Teens, Famous 5s and Bad Circles are also included.

We were first introduced to the Numberjacks when Kidzone was on Freeview. Sadly it is no longer so we have bought all the DVDs that have been released. Seaside Adventure is different from the others, which are short episodes, it is one 45 minute long adventure.

Seaside Adventure's main maths idea is that there are different ways of making the number ten. The Numberjacks pair up to make ten. This idea is more at my 4.5 year olds level. Her 3 year old sister still enjoys watching it for its entertainment.

I have heard of some children having nightmares about the meanies after watching it but I haven't found this with my girls. I recommend this and the other DVDs to friends with young children and they have all raved about it too. It is a fun way for children to learn basic numeracy skills.