How To Get Away With Murder - Season Two review 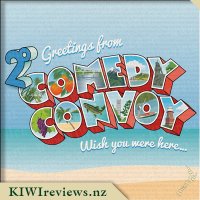 Dinosaur Train: All Aboard the Zeppelini
Rating: 7.3

When it comes to humour, for me the best is Brit. I love the jokes that have layers to them, that you can enjoy on a number of levels, and while I am not too big a fan of comedians who target audience members to get the laughs, tonight's show would have been less than it was if it weren't for a few drunks in the audience who decided to become a part of the show... semi-frequently.

The first act on stage, after MC Marcel, was Welshman Lloyd Langford. Lloyd gave us some great reflections on the strangeness of our Kiwi culture as seen through the eyes of a visiting guest, from the guy at Customs who patted him down and found a pocketknife but was more concerned that he wasn't trying to smuggle in any fruits of veges, to how casual we are about earthquakes and volcanoes in our midst. He was a great start to the night, and warmed the audience up nicely after Marcel's opening gambit of typical Gallic dismissiveness.

Next onto the stage was British comedienne Angela Barnes, who treated us to tales of her romantic encounters as she explored the great mysteries of Tinder Dating, and how she found her boyfriend online. There were more than a few semi-embarrassed audience members laughing along with her tales as they saw their own efforts at digital love being reflected in her antics. Self-depreciating humour is always risky, but in true Brit style she pulled it off with style.

Intermission gave everyone a 20 minute break, during which there was an opportunity to win a 2degrees phone and credit prize... and much to the annoyance of many, it was revealed afterwards that the short-code number everyone was told to use was only valid if you were already on the 2degrees network. Even MC Marcel commented what a pointless exercise that was. Still, much entertainment was had by all as the "New Town Catchphrase for Hamilton" entries that were deemed funny enough to contend for the prize were read out... to be won by audience applause was "Hamilton: Come for the Gardens, Stay for the Crushing Depression." That provided much raw material for Marcel before he introduced the third act of the night, Aucklander Jamie Bowen.

Jamie, being a kiwi, knew all the right buttons to push to get the audience laughing heartily. Within minutes of his set starting, the chuckling and laughter was almost constant - he was on fire and throwing out verbal gold. His tale of why he has a special bond with Hamilton had everyone in hysterics from moments after he started the story. His idea for reinvigorating Huntly's economy by "Hipster Gentrification" was inspiring.

The final act of the evening was Wilson Dixon from the USA. Dressed in true cowboy style, Wilson sauntered on to the stage and proceeded to twang away on his guitar, and treated the audience to a couple of hilarious songs about social awkwardness. Wrapping up his set with the ballad "That Thing You Do - Stop Doing It" had some audience members gasping for air due to laughing so hard. Contemplating how, after the 'honeymoon stage' of a new relationship is over, there's all those little quirks that come out of the woodwork as you both start to let down your guard and relax... and how some of them are real deal-breakers.

Overall, this was a fun evening out, with some very talented comedians performing. I am a 'tough crowd'... I know it, and I am not ashamed to admit that most comedians I have seen perform - live or on TV - leave me confused as to why anyone is laughing at all. However, on this occasion I found myself sniggering and chuckling along almost from the start. There were a couple of small patches where things could have gone horribly wrong though. Some humour is not OK in some circles. That said... it's a sign of great skill on the part of the comedian to incorporate such antics into the show in a jovial and pleasant way, while still putting the idiots in their place. This was epitomised by Marcel Lacont who deftly handled a heckler at the very end of the show who yelled out a racial slur about the French and their drinking habits. Marcel did a wonderful job of making the idiot look like... well, just that... much to the delight of the rest of the audience.

Opened to mark Queen Victoria's 60th Jubilee, The Esplanade includes a Children's Play Area, A large Duck Pond, A Cherry Drive and an Avenue of Phoenix Plants. There are walk ways and a miniature railway through the native bush. The Esplanade also features Paddling Pools, Croquet Lawns, an Education Centre, Conservatory, Arboretum and a Bird Aviary.

The Esplanade is treasured by Young and Old alike.

There is no entrance fee, a small charge for train rides and a Cafe within the grounds.