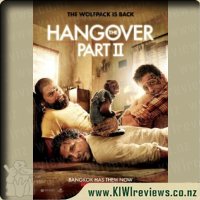 Stu is getting married. Along with Doug, Phil, and his soon-to-be brother-in-law Teddy, he regretfully invites Alan to Thailand for the wedding. After a quiet night on the beach with a beer and toasting marshmallows by the camp fire, Stu, Alan and Phil wake up in a seedy apartment in Bangkok. Doug is back at the resort, but Teddy is missing, there's a monkey with a severed finger, Alan's head is shaved, Stu has a tattoo on his face, and they can't remember any of it. The wolf-pack retrace their steps through strip clubs, tattoo parlors and cocaine-dealing monkeys on the streets of Bangkok as they try and find Teddy before the wedding.

The Hangover Part Two was very very similar to the first instalment, hence my opening line. Hangover two paces, moves, and delivers in the exact same style, is set at the same pace as the first, the music sounds the same, some of the set-ups are the same, some of the conflicts and revelations were alike, it just felt like the same movie, the only realy stand out difference was that this is set in Bangkok and not in Las Vegas.

Now, don't get me wrong, the movie is still really fun but some of the jokes are just cringe worthy as they are even delivered in almost the same way as the first film. This time Stu is getting married in Thailand in order to gain approval from his fiancee's father, last time it was his girlfriend who was overbearing, during a night of drinking with the "Wolfpack" his fiancee's brother, something goes wrong and they wake up the next morning with no memory, in Bangkok and one of the group has vanished. The acting is as good as it was in the first but Allen is much more annoying in this movie and just doesn't pull it off this time.

If you enjoyed the first then you will enjoy this, but there was room for improvement.

Living in perfect harmony in gravity-defying cities above the clouds, the inhabitants of the planet Terra are complete strangers to war. So when Terra is invaded by human beings fleeing a civil war and environmental catastrophe, many of the Terrians at first welcome the invaders as gods. Only the feisty young Mala fights back, luring one of the invading spacecraft to crash after her father is abducted, then rescuing its pilot - a human named ... more...