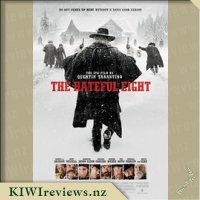 In the dead of a Wyoming winter, a bounty hunter and his prisoner find shelter in a cabin currently inhabited by a collection of nefarious characters.

I have wanted to see this movie ever since it came out, partly for the actors in it but more so as it is a Quentin Tarantino movie. Since his statement came out that he would retire after his tenth movie it is quite sad that this is already his eighth movie noted on the opening credits. I expected something along the lines of Kill Bill or From Dusk to Dawn and have blood and gore everywhere but instead it is extremely 'Dialogue Heavy' with very little action to it.

Like Kill Bill it is split into chapters and tells the story in bits and pieces. The second story was extremely slow and my eyelids started to close which was surprising since it was about Walton Goggins character and I loved his speeches in the television show Justified where he played Boyd Crowder, instead I found him rather boring and my mind started to wander. Luckily the movie improves as it goes on but I did have to adjust my expectactions some. I noticed as it got closer to the end my husband and I were completely under its spell.

One thing I love about Quentin Tarantino movies is he likes to stick to the same cast so it was great seeing Kurt Russell (Death Proof), Samuel L. Jackson (Django Unchained, Kill Bill: Volume 2, Pulp Fiction, Inglorious Basterds, Jackie Brown) and Michael Madsen (Kill Bill: Volume 1 and 2, Reservior Dogs) and of course New Zealands own Zoe Bell staring in the film. Although to be honest my biggest draw card was Channing Tatum and was rather guttered he was hardly in it.

It is a rather clever movie, your job is to figure out who is real and who is fake. Jennifer Jason Leigh is amazing as the criminal who is being transported by Kurt Russell to Red Rock for her exercution, when a storm makes them detour to Minnie's Haberdashery. There they encounter a group of men also bunkered down due to the weather, but who is telling the truth? There is a bit of blood but nothing like I was expecting and as I am not a fan of Samuel L. Jackson and I was preying for a shark to appear whenever he spoke.

Not his best movie but definitely not his worst. Great acting even though a few of the characters were not very likeable. Could of had a better ending but it is passable. You will enjoy if you like mind games, the use of the word Negro, swearing and a lot of talking. Some blood but more for decoration and did I mention it is Talk Heavy?

Published in 1936, "In Dubious Battle" is considered the first major work of Pulitzer Prize winning ... more...