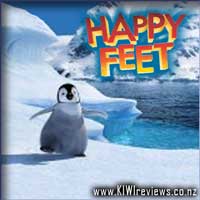 "Happy Feet" is set deep in Antarctica. Into the land of Emperor Penguins, where each needs a heart song to attract a soul mate, a penguin is born who cannot sing. Our hero Mumble, son of Memphis and Norma Jean, is the worst singer in the world... however, as it happens, he is a brilliant tap dancer!

I had been told that this is a great movie if you have kids, I thought about it and asked various friends what it was about before deciding to give it a go.

The kids loved the movie, they enjoyed the singing and dancing and even tried to copy the dances and were totally in love with the penguins. They warned the penguins of the bad guys (leopard seals). I liked the music and loved the story, even felt sorry for poor little Mumble, I could relate to his problems and his parents as I have a special needs child so it was great that the story was that it is ok to be different and that sometimes change is the best course of action.

I love Robin Williams and have been known to go to see his movies just because he is in it and this was no disappointment. We have the sequel but I haven't paid that much attention to it as yet, with kids it is hard to get the DVD player to myself.

Happy Feet looked like the perfect movie to snuggle up to watch with my girls (4 and 2.5 years at the time) on a cold wet afternoon. They were excited when they saw it and I had been thinking about watching it myself for years. It had everything that should have appealed to the girls: singing, dancing, humour and cute penguins; but unfortunately the movie just seemed to drag and we all lost interest fairly quickly.

This didn't stop my girls for asking to see it again during the week we had rented it but each screening was very short lived. My girls now, a couple of months later, have fond memories of Happy Feet and they say that any cartoon penguin is from the movie. I have heard other kids and parents rave about Happy Feet and it must have done alright at the box office since they made a sequel, but unfortunately it didn't grab us. It isn't even a DVD we might try in another year or so as I found it quite bland apart from some lively song and dance sequences,

A gorgeous movie full of humour and cute characters I really enjoyed watching this movie and would watch again if the opportunity ever came up. Im an early childhood teacher so a total child at heart (haha yes i do enjoy watching a kids movie every so often)... I am also a competitive dancer so i really enjoy the cute little dance segments that were a part of this film, the sound track (in essence the songs sung) were also great.

Happy Feet is all about a cute, shy little penguin who doesn't seem to fit in with his friends or family... The movie sets to explore this and that being different is ok... This movie definately has something for everyone, obviously a child wouldnt pick up on many of the notions explored but in essence there is a few different political things happening (saving our environment etc) as well as the love story and the ups n downs of friendship.

I havent yet seen the sequel but would like to (perhaps if we ever hire movies again some time soon)! Would recommend this movie to others, and would think that depending on your child, aged four and up would enjoy (depending on their levels of concentration).

This is one of my daughter's all time favourite movies. She was going through a penguin phase, so I bought the DVD home one weekend. We proceeded to sit and watch it under a duvet with a big bowl of popcorn between us. It was released right before she was born, which is why I never got to see it on the big screen. If she had been around though I would have gone and taken her with me. This movie is really neat. The computer graphics are great, especially given when it was put together and how far CGI has come since then. Even now, it stands the test of time for the animated water, and the look and feel of the fur. Its not perfect, but its pretty close.

My daughter was instantly engaged when the DVD came on. She sat motionless for almost the entire movie, only moving to grab popcorn occassionally. She loved the characters, especially Mumble. She loved seeing the penguins in their natural environment. She liked seeing them hunt, and despite a few tense moments, watching them become the hunted. The reality of nature was there, but not too in your face. It was enough for little ones to handle and offered some teachable moments if your child is the sort to query predator/prey and food chain stuff. I also liked the environmental aspect, which opened up a discussion afterwards about what we could do to help.

Of course when us humans aren't around to see, I doubt that the pengins really break into epic song and dance routines with our most popular rock and pop ballads. But as an adult you just have to suspend your disbelief on that one. Kids love musical hits and after the first screening of this film, my daughter spent every other viewing dancing to all the songs as they came along. The musical arrangements were pretty cool too, because they medley them together as each penguin has their own tune.

I went and saw this when it came out at the movies with my mother. As it first got into the storyline, I loved it. A shy little penguin, who doesn't fit in, madly in love with his friend needs to find a way to be accepted.

I really enjoyed the penguins versions of songs that were well known, the attention to the dancing etc was great. The characters were lots of fun, Robin Williams, as always a great addition to any movie.

But then it got to the part where Mumble chases after a boat and ends up in an penguin enclosure. I could see where the makers of the film were going, and how they were trying to point out the dire situation when it comes to taking care of life on our planet, but to me it just felt disjointed, like it didn't fit, and all I was left thinking was 'when is it going to get normal again, and back to the story line?'.

I thought the ending was utterly fantastic. My 4yo and 3yo haven't seen Happy Feet or its sequel yet, but I'm sure that they will love it when they do finally grab it off the shelf at the video store. As for myself, though, it's not a movie that I am interested in watching again simply cause I didn't feel like it all gelled together.

What a great movie! Cute characters, humour and an awesome soundtrack!!

It has something for everyone, there is a political story line, a love story line and of course friendship highs and lows.
It didnt hold the attention span of my two year old but my thirteen year old has seen it 4 times.
It's hard to pass up a movie with Robin Williams as a character and he doesnt let us down in this one. Highly recommended!!

this is the cutest/most peculiar CGI movie I have seen in a long time.
This movie clearly has elements of Shrek, Shark Tale, and Madagascar reflected through it, yet it retains it's own individuality.

The characters are absolutely adorable, judging by the "awww I just wanna bring him home" I got from my "cinematic experience enjoying accomplice" when I stood to leave the cinema.

The character input was amazing, down to the finest detail. The movie has an easy-to-follow plot, with a clear attempt at making a political statement toward Mankind's activities in antarctica.

Overall a very age appropriate movie, enjoyable by most ages, I would definitely see it again, once it comes out on DVD.

A definite must see for everyone who is looking to enjoy a movie, that doesn't need to be explained to them step-by-step.

This is a great movie for the young ones, but I have to admit that I have seen better CGI 'toons... The highlights of this one would have to be Robin Williams' characters. He does GREAT penguin... Though it had a veritable bevvy of famous voices, naturally there wasn't much acting involved.

The storyline was... well, weak. There was an attempt at a moral in the story, some kicking music, a thinly-veiled attempt to get people to wake up to the huge amount of damage we are doing to our dear planet home (which is better illustrated in other movies such as The Day After Tomorrow for example), but otherwise there really wasn't a lot in it for me as an adult.

Overall, it wasn't too bad, but not really my thing. Kids will love it though... mine did.

Score: 8.0
Product reviews for listing 8234: Sorry To Bother You
Directed by Boots Riley

In an alternate present-day version of Oakland, black telemarketer Cassius Green (Lakeith Stanfield) discovers a magical key to professional success, which propels him into a macabre universe of "powercalling" that leads to material glory. But the upswing in Cassius' career raises serious red flags with his girlfriend Detroit (Tessa Thompson), a performance artist and minimum-wage striver who's secretly part of a Banksy-style activist ... more...