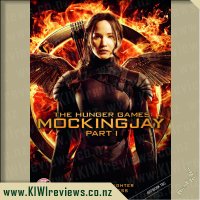 Katniss Everdeen is in District 13 after she shatters the games forever. Under the leadership of President Coin and the advice of her trusted friends, Katniss spreads her wings as she fights to save Peeta and a nation moved by her courage.

My husband and I were browsing the shelves at our local rental store and I decided upon this movie (since hubby had picked a game for himself) as we have seen the first two in the franchise (and own them) as well as I have read the book series. We take off very, very soon after the events of the second movie, Katniss is in District 13 and piecing together the events that happened afer she shot an arrow into the dome. This movie moves a lot slower than the first two, but it is essential in that we need to see Katniss grow and become the Mockingjay that they want her to be.

Whilst I didn't enjoy this as much as the previous two films, it is still well acted and keeps everything flowing along well. Given what is in the book I can assume that final movie will have a lot more action in it, which will be more than fitting after this slow build up. This film wouldn't do good to watch on its own, if you haven't seen the previous two then don't bother starting with this one as it may just put you off the series. There are a couple of touching moments such as with the hospital attack and Katniss trying to find Primm when the blast doors are closing, but one does get a bit tired of the constant "Peeta, Peeta" and the hint again at the love triangle which wasn't really done well.

I enjoyed the movie overall, and I will watch it again for a marathon, but a little more action in it couldn't have gone astray. I was almost concerned that I had forgotten how the previous installment had ended when I started watching this. The opening scenes had me confused as to who had saved Katniss previously. But it soon enough made sense.

This film has a different layout to the two previous films, obviously due to the fact that it doesn't actually involve a Hunger Game, but that also means that this film has a lot less direct action in it. The emphasis changes from an action film to that of political drama. That being said, there is still a lot of death and violence involved, it is just portrayed in the past tense, and off screen. There are only a couple of scenes that involve direct Rebels vs Capitol, and even less of it involved Katniss. To compare it to horror films, 'Mockingjay Part 1' is less like the slasher flick 'Friday the 13th', and more like the 'Saw' franchise, where anyone could be a victim, anyone could be being played, and everything has a consequence.

I was honestly hoping for there to be a lot more action. To have it drop off in the third film so suddenly was disappointing, and when it is building up to the final installment, I was expecting some more tension. Even the final events of Part 1 failed to instill me with the assurance that something big was coming. I hope that Part 2 will deliver what was missing from Part 1; more scenes like what occurred in the "rebel hospital" portion of the film. More of Katniss kicking ass, and less of Katniss whining about missing Peeta.

The graphics were well done, and it was good to see all the cast returning yet again. It is one of the things that kept the movie together, when the entire environment and film layout had changed. Entertaining, but really more of a "filler" movie. I probably honestly wouldn't watch it again unless I was marathoning the entire franchise. Not what I would calla great standalone