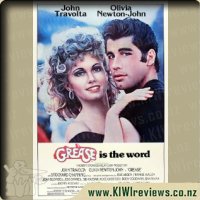 A musical about teens in love in the 50's! It's California, 1959 and greaser Danny Zuko and Australian Sandy Olsson are in love. They spend time at the beach, but when they go back to school, what either of them don't know is that they both now attend Rydell High. Danny's the leader of the T-Birds, a group of black-jacket greasers while Sandy hangs with the Pink Ladies, a group of pink-wearing girls led by Rizzo. When they clash at Rydell's first pep rally, Danny isn't the same Danny at the beach. They try to be like each other so they can be together.

Grease is one of those movies I grew up with as a kid, and as such is one of my personal favourites. I am not a big fan of musicals, but there are a small handful that I really do enjoy. So when at the warehouse oneday and I spotted it on special for just $4.99 on DVD, I had to have it. I could not waot for my family to get home from work and school so I could tell them about my purchase.

Hubby like me was very excited, and I kept going on and on to my kids about what a really cool movie it was, and that I was super sure they would love it as much as I did/ do. My boys were slightly older than I was when I first saw it, and my girl a couple of years younger, but I was still sure they were going to enjoy it. I mean what is not to love? Cool cars, cool songs, cool jackets, and a neat story line. Turns out I was super wrong lol

My daughter watched a few minutes then dissappeared to her room to watch a cartoon. My oldest son watched about twenty minutes then off he went to play ps3. My middle son watched it all, but at the end announced "yeah the cars were cool mum but the movie wasnt". I would have been dissapointed but truth is I love it that much, I did not really care that they didn't haha

It is a classic movie but one that still holds its own even now. The music is still catchy, the story line still edgy, and it is well written and directed. For such an old movie it is still enjoyable and I will always love it.

I can remember the first time I saw the movie, my parents were excited about the movie Grease coming on TV, I asked what it was about to be told to just watch. The songs were catchy, I still sing along to most of them, just don't ask me to dance. I really enjoyed the story, I was a young teen when I first saw it and had just noticed boys, and the innocent way they did things, we didn't see a lot of steamier scenes like you do in a lot of the newer movies.

I have since watched it a few more times. I was telling my kids about the movie the other day, I was singing in the car to one of the songs, and they have asked to see it. I suppose the main attraction was the music and dancing and a wonder of how things would have been in the 1950 (which is a bit before my time). Had to have a laugh at some of the things both Danny and Sandy tried to be more like the other instead of just being themselves and then neither one likes the "new" Danny or Sandy.

I own this on DVD and yes I do watch it from time to time.

Grease is a movie that I have loved since I first watched it.

With any musical I watch there is always one song, at least, that I don't enjoy and so skip it every time (if I'm watching a movie on my own, with others around I deal with it) and in the case of Grease it is "Hopelessly Devoted to You" I just have never really gelled to the song and still don't really like it now, though it is hard to put a finger on just what it is I don't like. Other than that, I really enjoy all the songs with "Summer Nights" and "You're the One That I Want" being my favourite, and the background music really suits as well.

It's funny to watch it now, knowing that the actors were all in their 20's with two in their early 30's, but all do a good enough job portraying their characters, some aren't 100% convincing but they're convincing enough to play the part and look good on screen. There weren't really any characters that I didn't like but I didn't like that they're all just interested in guys, but meh, that's me, never really been a fawn over a guy kinda gal.

Grease is a fun movie, should be watched at least once.