A League of Their Own review

ProdID: 3795 - The Blind Side
Directed by John Lee Hancock 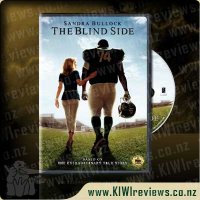 The Blind Side product reviews

Michael Oher knows little about family. Less about football. What the homeless teen knows are the streets and projects of Memphis. Well-to-do Leigh Anne Tuohy knows little about his world. Yet when she and Michael meet, he's found a home. And the Tuohys have found something just as life-changing: a beloved new son and brother. This real-life story of family and of Michael's growth into a blue-chip football star will have you cheering with its mix of gridiron action and heart-warming emotion.

Share the remarkable journey of the college All-American and first-round NFL draft pick who was a winner before he ever stepped onto the playing field.

I'm not usually a fan of based upon true story movies, and when I saw the trailer for this I wasn't interested in it that much, but my friend was free to go to a movie and at the time I didn't want to go to my husbands choice, and so my friend and I went to The Blind Side.

It took me a little bit to get into the movie, but once I did it had my full attention. The Tuhoy's know little about Michaels world, they live well in a nice big house, stark contrast to Michael who has just been kicked off the couch that he was living on. A chance encounter on a cold night leads to Michael being brought into their home and against all expectations he becomes a member of the family.

This is a heart warming movie, with some laughs and a few tears thrown in.

The Princess Bride is a 1987 American romantic comedy adventure film directed by Rob Reiner, based on the 1973 novel of the same name by William Goldman. Critically acclaimed and equally loved by adults & children!

The Princess Buttercup (Robin Wright Penn) is saddened by the disappearance of her true-love Westley (Cary Elwes), and finds that she now has no choice but to become engaged to the evil Prince Humperdinck (Chris Sarandon). ... more...