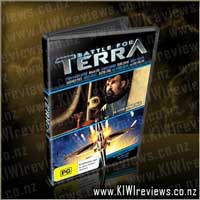 Living in perfect harmony in gravity-defying cities above the clouds, the inhabitants of the planet Terra are complete strangers to war. So when Terra is invaded by human beings fleeing a civil war and environmental catastrophe, many of the Terrians at first welcome the invaders as gods. Only the feisty young Mala fights back, luring one of the invading spacecraft to crash after her father is abducted, then rescuing its pilot - a human named Jim.

In return for saving his life, Jim promises to help Mala find her father, taking her on a perilous journey to the Ark - the humans' ageing mother ship. Along the way, Mala and Jim learn that their people really aren't so different from one another. But with the Earthforce army poised to invade Terra and render it uninhabitable for Terrians, Mala and Jim must find a way to help the two races coexist - before it's too late.

This was one of those 'cute' movies you let the kids watch as many times as they like, because though it shows how bad humanity can be in the face of dire times, there's no graphic violence or death scenes to damage their little minds.
The animation is great with some impressive CGI and wonderful 'alien life' designs, despite the gravity-defying nature of the native lifeforms. If gravity was so weak, the human 'Jim' would have had a lot more trouble moving around than he did - the good ol' moonwalk would have been obvious - and if gravity was close to earth-normal then the Terrians would have needed to have been more closely designed to blimps than the sleek, flattened shape they were. Despite all this, the kids couldn't have craed less as they were too hooked into the storyline itself.
It's rare to find a movie these days where humans are the 'evil invaders hell-bent on xenocide' so it was actually good to see one that shows humanity's darker side, and how one honourable individual could make the ultimate sacrifice to save the native life in a way that opens the door for both sides to live in peace.
All in all this was a great movie, one I am glad to have on the shelves for the kids to watch when the family have their gatherings. I have no qualms about this one being put on with even the youngest viewers as there is enough 'fun' stuff to keep them enthralled. Even though most of the voice-talent is unknown to me, it's still good to see a few names I grew up watching are still plugging along, contributing to the art.

Growing up, Rebecca never knew what lay behind the terror lurking in the dark. When she left home, she thought she'd also left her fears behind. Now her little brother, Martin, is experiencing the same unexplained and terrifying events that once tested her sanity.

A supernatural entity with a connection to their mother's past is haunting them, and as Rebecca gets closer to discovering the truth, her life and the lives of those around her are in danger ... once the lights go out.