ProdID: 5103 - Curse of the Puppet Master
Directed by David DeCoteau 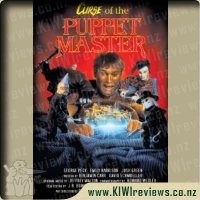 A scientist attempts to master the art of transferring people's souls into puppets.

Having never seen any of the Puppet Master movies prior to this one I can't comment on continuity or if it stacks up next to the previous films, but my husband has seen all made in the series and it can still stand alone as there is enough in the movie to figure things out.

This movie is full of cliches and none of them any of them any good, in fact it is cliche after cliche which doesn't do the movie any good at all. A man is wanting to create a living puppet similar to the ones that he already has (but created by a different person), and unbeknownst to his daughter and her boyfriend, he has chosen to use the boyfriend, transferring him into the puppet, eventually, takes the entire movie to get to that point.

Curse of the Puppet Master is full of cheesy moments and really bad script writing, it's enough to put me off watching any of the other movies in the series but general rule of thumb is that the more movies in a series made the worse they can get, so I"ll watch the others at least once for my husband. There is some gore in here of course, can't have killer puppets without having any killing going on, nasty enough to ensure that should anyone survive the trauma they couldn't procreate.

Cheesy, cliched, really only watch it if you enjoy the series.