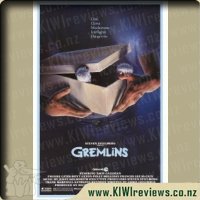 Minature green monsters tear through the small town of Kingston Falls. Hijinks ensue as a mild-mannered bank teller releases these hideous loonies after gaining a new pet and violating two of three simple rules: No water (violated), no food after midnight (violated), and no bright light. Hilarious mayhem and destruction in a town straight out of Norman Rockwell. So, when your washing machine blows up or your TV goes on the fritz, before you call the repair man, turn on all the lights and look under all the beds. 'Cause you never can tell, there just might be a gremlin in your house.

Depending on your age Gremlins is either a horror or a comedy / horror movie.

"Gremlins" is about a young man who receives a very unusual Christmas gift from his father (who buys it off a child after the kids grandfather says no). He gets a little friendly creature called a Mogwai, which is as cute as a button. But there's a twist. There are three rules that must be followed in caring for the Mogwai: Rule #1 - Keep them away from light; Rule #2 - Don't get them wet, and Rule #3 - Don't feed them after midnight. The rules, of course, get broken, leading to mayhem and one heck of a Christmas.

Even though the special effect monsters steal the show, the acting by the human actors is very good too. Galligan makes the most of his film dĂ ©but as Billy, Cates is effective as his girlfriend, Axton is a hoot, McCain is good as the mother, Holliday is wickedly funny as Mrs. Deagle, the meanest woman in town. Everyone does a good job but the real show stealer's are of course the Gremlins, with them looking really creepy, even today I wouldn't want to meet one of them. There are some plain silly parts, and some annoying (the girlfriends reaction to being asked why she hates Christmas for example) but overall it is a fun movie.

If you like monster movies with a bit of a laugh then Gremlins is for you.