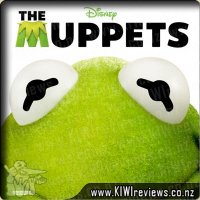 On vacation in Los Angeles, Walter, the world's biggest Muppet fan, and his friends Gary and Mary from Smalltown, USA, discover the nefarious plan of oilman Tex Richman to raze the Muppet Theater and drill for the oil recently discovered beneath the Muppets' former stomping grounds.

To stage The Greatest Muppet Telethon Ever and raise the $10 million needed to save the theater, Walter, Mary and Gary help Kermit reunite the Muppets, who have all gone their separate ways: Fozzie now performs with a Reno casino tribute band called the Moopets, Miss Piggy is a plus-size fashion editor at Vogue Paris, Animal is in a Santa Barbara clinic for anger management, and Gonzo is a high-powered plumbing magnate.

My son won a copy of this on DVD and I really wished, after watching it, that we had managed to go and see it on the big screen. I had everything that I knew and loved about the muppets, and it felt so much more 'real' than the previous Muppets movies.

I loved all the jokes, the ones that the kids found funny but that we adults would understand more and also find just as funny. It will be fun in a couple of years time to tell my kids that the 80's Robot using his modem is how it used to sound when you connected to the internet.

The songs were great fun, and I find myself singing them to myself at times, from the iconic Mahnamana to 'Am I a man or am I a muppet'

Throw in the celebrities sprinkled throughout the movie and you have a great film for all ages. This is one movie that having only owned for a month, has been watched at least 10 times already, and will be even more so.

I recently had the pleasure of watching The Muppets movie. I had been really looking forward to it. The muppets were a huge part of my childhood. I had kermit and miss piggy everything from clothes to badges and toys. I'm a huge fan of Jim Henson and so it was nice to see his creations coming back to life.

We sat and watched the film on the weekend. It did not disappoint me at all. It was the same old gang. The same zany antics. But it seemed more adult as well. It was nostalgic and fun.

I really enjoyed the musical pieces. The new songs were clever. The old ones were classics I sang along to. It was a bit hokey in places, but that just made the movie for me. I loved the song and dance parts.

My daughter enjoyed the movie too. But she got a lot less out of it than I did. This movie is very much a homage to us orginal muppet fans. Kids of today can absolutely enjoy this, but my 5 year old wasn't as keen to see it again after the first viewing. And she knows the muppets because we have a boxset of the original tv series.

Still, this is a great movie. Really funny, great talent and loaded with cameos. I totally recommend this for all diehard Muppet fans and those who enjoy the comedy of Jason Segel.

When I found out that the Muppets were returning to the big screen I was very excited. I was a big fan of the Muppets as a child and count Miss Piggy as one of my role models growing up. So with high expectations, my husband and I went along to see this movie and it did not disappoint.

The Muppets return to movie theatres is in large part thanks to Jason Segel, who pitched the idea for the movie and co-wrote the script, as well as starring in the role of Gary. The plot of the movie draws on his desire to bring the joy of the Muppets to a new generation.

His character, accompanied by younger brother Walter and girlfriend Mary, are on a mission to reunite all The Muppets and save the Muppet Theater from the requisite baddie of the movie. The implausibility that the very much human Gary has a brother that is a puppet doesn't detract from the plot at all - it's a Muppet movie, so craziness is expected.

Amy Adams portrayal of the sweet Mary was lovely and reminded me of her performance in 2007s Enchanted, which also showcased her singing ability. The movie has many brilliant musical numbers including some old favourites, new Muppet songs written by New Zealand's own Bret McKenzie, and one of my favourite parts of the movie, an hilarious cover of a recent hit song by Camilla and the Chickens.

Muppet movies are known for their celebrity cameos and this one is no exception. Twenty celebrities have guest starring roles and provide some of the best laughs of the movie, my favourite cameo being Jim Parsons of TVs The Big Bang Theory.

The session of this movie we went to was viewed by a group made up solely of twenty and thirty-somethings and you could feel the delight in the theatre as our Muppet memories from childhood came flooding back. It was nice to forget about all the stress and worries that you experience as a grown up and for 103 minutes simply enjoy some pure unadulterated fun.

I begrudgingly went along to The Muppet Movie because the kids were keen to see it. Not being a huge Muppet Fan I didn't relish sitting through a whole movie. I was, however, really surprised. It started with the cheesy American song and dance routine which I thought initally didn't bode well but after about 10 minutes of watching the movie I started to even enjoy it. The premise of time having gone by and the Muppets no longer being popular and their studio in the process of being sold to a rich magnate and his corporation set the scene.

Add Walter ( the newest muppet) and his human brother Gary (Jason Segal) along with girlfriend Mary (Amy Adams) and the eventual search for Kermit, Miss Piggy and the rest of the Muppet team and you have the ingredients for a feel good fun movie. The way to save their run down abandoned studio is to get everyone together and put on a show and raise 10 million dollars. The movie works through the process of finding everyone and then getting the show organised. Kermit and Miss Piggy never fail to amuse! Jack Black has a role to play and is really funny.

The whole movie is a feel good sing along nostalgic stroll down memory lane. You can't help but sing along to The Rainbow Connection and Mahnamahna - loved it! It spanned the generation because my kids loved it too and they don't remember the original muppets. There was more than enough to keep adults and kids entertained. Best part was the people in the cinema all applauded as it finished and it's not often that happens. Definitely a movie not to miss!