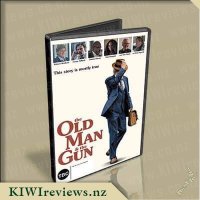 Robert Redford stars in The Old Man & The Gun, a beautifully crafted film inspired by the true story of career criminal Forrest Tucker. Following a daring prison escape, Forrest embarks on a string of bank robberies that confound the authorities and enchant the public.

Wrapped up in the pursuit are detective John Hunt (Casey Affleck), who becomes captivated by Forrest's commitment to his craft, and Jewel (Sissy Spacek), who finds herself falling for the charismatic stranger.

In homage to the classics that made him a star, Redford delivers a magnetic performance in The Old Man and the Gun, a fun, thoughtful reflection on a life well-lived.

Robert Redford is an acclaimed actor, and he chose his last film to star in very carefully. The old man and the gun is the perfect film to portray Redford's acting skills. The movie is a 'mostly' true story of the infamous bank robber Forrest Tucker. The story picks up after Forrest's last escape from prison, escape number 17 and it portrays how one can be both a gentleman, and a thief.

Tucker's character is very likeable, in fact I found myself cheering him on, even though he was supposed to be the villain in the film. You simply cannot help but admire someone with the charm and can do and attitude that Forrest possess - he is infallibly charming and thoughtful, and has a way with the people he encounters.

This film captures a spirit that perhaps we all wish we could capture, a drive to find the next adventure, even at the ripe old age of seventy. The movie is complete with a love story, and I think this adds to the realism of the film, love does not look the same at seventy as it does as twenty, and yet it is sweet and authentic and as a viewer you find yourself wishing there is a happy ending for our main characters.

I thoroughly enjoyed this film, and I found myself googling Forrest Tucker to learn more about him after watching the movie. It is incredible that a man escaped from prison 18 times, and that he was in his seventies when he escaped last. He lived a rich life, and there is perhaps a lesson here for viewers, seize every opportunity that life presents you with.


I would and have already recommended this film to others, although it has a rating of 'M' I watched it with my teenage children as there were no sexual scenes, and the movie wasn't riddled with violence, although there are a few scenes with guns, but it is not an overly violent film. When I asked my teenagers about their impression of the movie, they became animated and told me they enjoyed the film and they loved his passion for life.

On the eve of the 2004 Presidential election, with the USA at war in both Afghanistan and Iraq, news producer Mary Mapes (Cate Blanchett) and her long-time partner, legendary news anchorman Dan Rather (Robert Redford) uncover an incendiary story. A sitting US President may have been AWOL from the United States National Guard for over a year during the Vietnam War.

Hours after the story breaks, its veracity is questioned. The ensuing ... more...