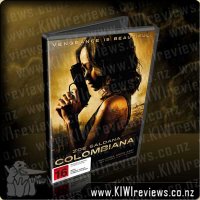 A young woman grows up to be a stone-cold assassin after witnessing her parents' murder as a child in Bogota. She works for her uncle as a hitman by day, but her personal time is spent engaging in vigilante murders that she hopes will lead her to her ultimate target - the mobster responsible for her parents' death.

Writer/producer Luc Besson returns to a genre which he helped define with Colombiana, and although he hands the directorial reins to one of his proteges, the fantastically monikered Olivier Megaton, the French maestro's fingerprints are all over this film. The story of a sexy female assassin (Zoe Saldana) seeking vengeance on the drug cartels who murdered her family works as a nice companion piece to Besson classics La Femme Nikita and Leon, with the latter being of particular influence in several sequences. What Colombiana lacks in comparison however is the classy, art-house style of these earlier works, yet the increased action, more reminiscent of Besson's Transporter series (of which Megaton helmed the third), generally works fairly well, and Saldana delivers a capable performance as heroine Cataleya.

That said, Colombiana is not without it's problems. The film tends to take itself a little too seriously, particularly in some of the largely redundant romantic scenes between Cataleya and under-appreciated boyfriend Danny (Michael Vartan), which tend to drag down the pacing and leave you impatiently waiting for the next action scene. Bizarrely, several timeline based continuity errors are also potentially distracting. As an example, for no discernible reason the majority of the film is set in 2007, yet the wall of the office belonging to the CIA agent tasked with tracking down the unknown assassin features a large photo of President Obama, two years before he became president. It's nitpicking to be sure, but suggests a lack of attention to detail that perhaps hampers the film's success. Mistakes like this would be more forgiveable if the film-makers were more willing to embrace the silliness and fun elements of the story, rather than reaching for something more affecting than is necessary. Still, it's more or less a good time waster, anchored by a solid performance from Saldana, an actress who continues to impress in action roles.

After her father unexpectedly dies, young Ella (Lily James) finds herself at the mercy of her cruel stepmother (Cate Blanchett) and stepsisters, who reduce her to scullery maid. Despite her circumstances, she refuses to despair.

An invitation to a palace ball gives Ella hope that she might reunite with the dashing stranger (Richard Madden) she met in the woods, but her stepmother prevents her from going. Help arrives in the form of a kindly beggar woman who has a magic touch for ordinary things.