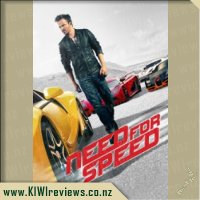 If you are a fan of racing movies or just cars in general you are going to love this very predictable movie. Think Smokey and the Bandits meets Speed meets Fast and the Furious with a little bit of Gone in 60 Seconds this is pretty much this movie wrapped up in a bow for you.

As with most racing car movies you have the good guy, the bad guy the obvious death and then the vengance race not much else really. Like I said very predictable. The driving scenes were good but I didn't like the head shots all the time, watching someone stear at a window or look in the rear view mirror is not that exciting. The death scene was very well done and I enjoyed the sequence for how it happened. But the final race you expect spectacular crashes but they just kinda stop and race forward back to the race.

One thing I hate about these movies is the portrayal of the police. I really do not think they are as silly as this and no where in there handbook would it say to stop an illegal race but something on the accelarator and let the police car go out into the middle of the road to cause a crash. Neither do I think only police cars crash. It definitely has its silly parts but it is very watchable and keeps your attention for the whole movie even if you do find yourself yelling at the screen every once and a while.

You would think that a movie based on a video game would be pretty far away from amazing. This movie decided to prove that wrong, and get away from the fast and the furious type movies and go back to the roots of car movies for car lovers, such as Bullet and Vanishing Point. I believe it achieves that perfectly.

The plot is rather basic and in theory, it is nothing special. Good guy, bad guy and a pretty girl. But that's besides the point, This movie contains it all, and I will try not to spoil anything but it has illegal underground racing, cross country racing, action and super exotic racing. They have managed to get that all with a plot behind it that actually works. They've managed to make it so you can watch it over and over without it getting boring and predictable. I have actually seen it a few times and I will be happy to watch it again.

What makes this movie even more amazing, is that it was made with the use of absolutely no special effects. So everything you see in this movie actually happened without the use of any CGI or such. While there are a few of those "No way that will happen in real life" moments, it actually did happened in the movie which makes it a bit more exciting. That in a way is what takes it back to the roots of a great car movie. Where it is all about the cars, the driving and nothing else.

In short, if you love cars, if you love action and you love racing, you will love this movie. It is a great movie, one that can be watched over and over.

Years after Earth has been ravaged by an alien invasion, Ender Wiggin (Asa Butterfield), a shy, strategically brilliant boy, has been chosen to defend Earth from an ever-present hostile threat. His prodigious skills immediately apparent, Ender is sent to Battle School, joining hundreds of precocious young adults in the pursuit of becoming the ultimate military commander. As Ender excels at Battle School, he attracts the attention of the highly ... more...