ProdID: 5670 - Are We Officially Dating?
Directed by Tom Gormican 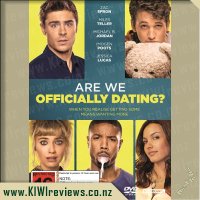 Are We Officially Dating? product reviews

In a show of support, the three long time buddies promise each other that they will avoid commitment at all costs and stay single together, but their plans are derailed when Mikey starts to surreptitiously date his ex and Jason and Daniel unexpectedly fall in love.

I was actually surprised by how much I enjoyed this movie. Think Sex in the City - but men not woman. Yes its predictable but its still a fun watch. It is the sort of movie you can just lie back and relax and laugh along with the guys. it does not require any brain power and it has the romance factor, but not so much. My husband was suppose to be 'on his tablet' but everytime I looked at him he was watching the movie and laughing along.

Zac Efron has definitely grown from his Musical High School days and is not bad on the eye. Hes plays the the typical player who falls for one of the ladies, but when things get too serious he runs away. Typically he realises months later he made a mistake and has to make a big show to declare his love 'like they do on the movies'.

Actually the movie is kinda of like Love Actually but on a smaller scale. All three guys are looking for love but still want to remain friends and don't want a girl to mess there friendship up. I liked the friend falls for friend story and then realises its really true love. It really was just a silly feel good kinda of movie. Great for a rainy day after an exhausting hard day's christmas shopping.

I watched this movie about 3 days ago and already it is hard to recall some of the main plot and characters, which is probably a sign that this movie was not the best. I found the movie quite humorous at some points but the story line itself was very unoriginal and the main plot weak.

Zac Efron and the other 2 male characters who play best friends have some good comedic moments which keeps the movie from being a drag, but then you get the highly predictable storyline, the stereotypical characters and highly unrealistic life situations that they all find themselves in. I am not saying that this movie was terrible, it wasn't, all I am saying is that it is no different to the many other romantic comedies out there.

I would not pay to see it again, and it was not one of my favorites. Having saying that though I think there would be many people who probably would enjoy this movie, mainly young adults and teenagers. Even though this movie is easy to follow I did find myself drifting off into distraction ( mainly trying to come up with a reason as to why the main characters insist on waiting until a vital moment in their lives to solve a problem/tell the truth, when it seems so obvious and easy to have done waaay back in the beginning of the movie). So yeah, I guess that's all I can say about this movie, but again I am sure many people will disagree with me.

I quite enjoyed this movie but it wont be my new favourite! My partner even had a laugh after he wasn't very interested in watching this, he is more of an action fan. Lots of laughs and plenty of eye candy, boy has Zac Efron grown up since his High School Musical days!!

The story line is easy to follow and provides endless humour that gave me a good ab work out! There were no mind blowing moments and I wouldn't say it is a "Must See" movie but it wasn't totally bad either. Good for a quiet night at home not something I would be happy paying good money to see! The story line is very predictable and you can guess what is going to happen I like a film to take unexpected turns. I feel that the story is entirely from the males perspective so maybe something youngish males may enjoy more than I did. There are some boring parts but the laughs more than make up for those.

The humour is quite immature but still amusing. This is not a movie I will watch again. It had its moments and great laughs but I felt the storyline was very cliche and predictable.

But trouble arrives when an intriguing stranger - Jerry - moves in next door. He seems like a great guy at first, but there's something ... more...