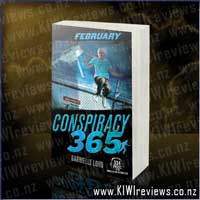 Disclosure StatementFULL DISCLOSURE: A number of units of this product have, at some time, been supplied to KIWIreviews by the company for the purposes of unbiased, independent reviews. No fee was accepted by KIWIreviews or the reviewers themselves - these are genuine, unpaid consumer reviews.
Available:
February 2009

On New Year's Eve, Callum Ormond is chased down the street by a crazed man with a deadly warning: They killed your father. They'll kill you. You must survive the next 365 days! Now he's on the run.

The people who killed his father want him dead, and the police are chasing him for a crime he didn't commit. A month has gone by and he's still no nearer to solving the Ormond Riddle, the family secret that has turned his life into a nightmare.

Can he trust the mysterious Winter Frey, or will she lead him further into danger? He has 334 days. The clock is ticking...

I Didn't do it for You: How the world betrayed a small African nation
Rating: 9.3

This book continues the story of Callum Ormond, and like the first book, it's action packed from the first few pages to the last few. As is the trend in many book serials now days they seem to enjoy leaving the reader in a state of suspense at the end of the book, which I find rather frustrating. I can accept the need to keep the user hooked in order to get them to buy the next one in the series, but I personally feel of the on going story is good enough, they will continue to read the rest of the books in the series.

Once again the author Gabrielle Lord has done a marvelous job of showing us young Callum's live after the events of New Years eve, and like the first book this one has plenty of action, but it is also revealing more of the backstory to what Callum is trying to find the answer to, what did his father want him to find out.

Whilst this is still early on in the series and it has another 10 books yet to come I feel that this is building into another winning series for Scholastic.

The second book in the Scholastic Conspiracy 365 series begins with the resolution of the first book's cliffhanger and ends with another. Between these two heartpounding near-death moments is the month of February. Callum is in hiding, trying to work out the mysteries left him by his father and why everyone wants to kill him. There is a girl on the scene now - Winter - who may or may not be on his side.

The Conspiracy 365 series is always an easy read. Definitely aimed at the lower teen audience, there is plenty of danger, blood and bruises and the beginnings of a possible relationship - though that is not dwelt on too much at this point. I am still enjoying the series and will definitely keep reading. I would rate it a little lower than the 39 Clues (my favourite of Scholastic's current serial puzzle books) because the 39 Clues has more engaging characters and is a little more fun, but for those of you that like dark, gritty young adult fiction (like 'Cherub') this is a great read that will grip you from cover to cover.

An excellent second installment in the Conspiracy 365 franchise. Though this series is making a bit of a slow start, the story is already starting to take shape, with many myseries being introduced, and the clear message that solving them could very well be the only way Cal is going to manage to stay alive for the year.

With much going for it, this book *is* aimed at the early teens as it's upper limit... this is not to be considered anything but an afternoon flick-through for anyone above the age of about 16, in my opinion, as it lacks all the trappings that so attract the late-teen crowd, such as soppy romance scenes or blood-and-guts fight scenes.

One advantage this series has, over the more in-depth cousin, The 39 Clues, also published by Scholastic, is that it is all written by the same author - so flawless continuity is virtually assured. However, this fact also is the greatest weakness, I think, because there is less opportunity for 'dynamic dramatics' that can arise when one author sees the over-arching plot in a slightly different way.

Overall, I would have to say this series has some great potential, and I look forward to seeing how it pans out and develops over the remaining 10 titles.

When I got this book, the first thing I noticed was that the cover was awesome because it looked very action packed, just like Book 1: January. The second reason I liked the cover was because it was blue which is my favourite colour.
The preview on the back cover caught my eye because it was fairly descriptive, and I didn't even need to have the book to read the preview, as I was able to read it on Book Two's sneek-peak at www.conspiracy365.com.
I found that the storyline was an enjoyable easy read, and it was so action-packed that it sent adrenaline rushing through my bloodstream like water rushing into a drain pipe. The big rush of energy came mostly from two parts of the book. The first part was when Callum was attacked by a lion, and the second part was when he was rapidly approached by an oncoming undergound train whith his foot stuck in the rails.
I think that this book is as good as the last one, so it also left me wondering "will Callum survive?" Right at the begining of the book it showed what happened in the last book meaning I didn't need to re-read it to understand this one, so that's good. Strap yourselves in for an adventure made in 12 months and 12 books. The coundown continues.

Twins Meg and Charlie are moving into their great-great-aunt's hotel, and they're in for some surprises! The rundown hotel is full of cool old rooms, a rooftop garden, and even an elevator. There's also one big problem - it doesn't have any guests.

But when Meg and Charlie volunteer to look after a neighbor's golden ... more...