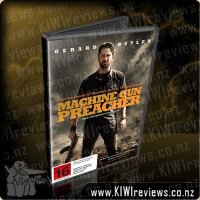 When ex-biker-gang member Sam Childers (Butler) makes the life-changing decision to go to East Africa to help repair homes destroyed by civil war, he is outraged by the unspeakable horrors faced by the region's vulnerable populace, especially the children.

Ignoring the warnings of more experienced aide workers, Sam breaks ground for an orphanage where it's most needed - in the middle of territory controlled by the brutal Lord's Resistance Army (LRA), a renegade militia that forces youngsters to become soldiers before they even reach their teens. But for Sam, it is not enough to shelter the LRA's intended victims.

Determined to save as many as possible, he leads armed missions deep into enemy territory to retrieve kidnapped children, restoring peace to their lives and eventually his own.

Now this is one that I have been itching to see for a while actually. Having been previously aware of the man behind the real story, I wanted to see how close to the truth this version got. Damned close, if not entirely accurate from what I can research.

The true story may seem like fiction to some - rough and tough biker discovers God and heads off to war-torn lands to sow the seeds of peace and love... or a few kilos of lead slugs at high speed if that proves necessary to get the job done. Totally "Hollywood" right? WRONG! That's pretty much exactly what happened to ex-thug Sam. He walked out of his old world, then out of his life in the better world - leaving a wife and family behind - and into the Third World, trying to find a way to bring peace and the love of God into the hearts and lives of the kids affected by civil war in Africa.

Bouncing between the ravaged desert land of Sudan and his home in America, he raised donations, funds and charity goods to ship back to the needy in the kill-zone, in an attempt to find redemption and peace in his own heart. Along the way he risks losing everything - his life, his family and his soul... but it's a mission Sam is still fighting to this day. This movie, despite a few moments of "artistic licence" are as close to the truth as Hollywood usually comes. The screenwriter was dedicated to "...doing it right..." and put himself on the front lines with Sam, going to the orphanage, talking with the kids and staff, and the soldiers who support and aid Sam's "rescue missions". This story is almost verbatim.

Overall, this looks, at first, to be a typical Hollywood action/drama... but it's not. It's a bio-pic - that's closer to a documentary but still using actors instead of the actual persons. Gerard Butler looks NOTHING like Sam Childers. Sam actually looks a lot like a slimmer, and fitter, "Paul Teutul, Sr" from American Chopper fame. However, I think Butler pulled off a brilliant rendition, giving all the gruff and grunt, as well as the heartfelt passion inherent in Sam's story. This is a great DVD for those who want to know more, and maybe want to get on board in some manner.

Host and author of the international best-seller Cracking the Da Vinci Code, Simon Cox, takes you on an in-depth journey through the heart of the mysteries behind Dan Brown's best-selling novel, The Da Vinci Code.

This comprehensive documentary cuts through the confusion, ultimately cracking Da Vinci's code and revealing the remarkable truth behind the legend of the Holy Grail.