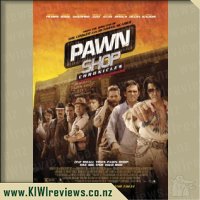 In this shop, these people may be pawning far more than they bargained for. Brendan Fraser, Elijah Wood, Vincent D'Onofrio, Matt Dillon, Norman Reedus, Thomas Jane, Lukas Haas, and Paul Walker, star in 3 twisted tales all connected by items from a Southern small-town pawn shop.

A man searching for his kidnapped wife, a couple of white-supremacist drug dealers, and a sad-sack Elvis impersonator, plus more desperate characters come to life in this action-packed and hilarious movie.

I wasn't too sure if this was a movie for me or not but I decided to give it a chance based upon the huge range or names that I could recognize and I like movies that can link more than one story together well.

In 'Pawn Shop Chronicles' we start with a couple of druggies who are busy planning to rob their drug dealer/cooker, a man on his honeymoon who discovers his missing wife's wedding ring and an Elvis impersonator who isn't the best and is quickly running out of money. All three link to the pawn shop in one way or another and bump into each other in short, random bursts that don't always make sense.

It's still hard to think what I thought about this movie, most of the time it felt like three short films as there wasn't a huge amount to do with the pawn shop, we don't even spend much time in the pawn shop at all, which I think beings the movie down a bit. This is a bit hard to place with genre as it's more of a black comedy but not really funny enough to be a full comedy.... a bit of drama thrown in too, I just don't really see what genre this should be.

The acting in this is really good but I do feel that most of the actors don't really fit the roles, I think that the roles are a little below their acting ability and the roles could have been handed to lesser known actors and the movie been just a tad better. Elijah Wood plays a psycho really well, super freaky (and not sure I can ever look at Frodo in the same way any more), Brendan Fraser does really well in his role of an Elvis impersonator really well, his story was placed throughout the movie so I enjoyed it a little bit more than the other stories in this movie.

I watched this with my husband and neither of us knew what to think of it, there's a rather nasty part in the movie that involves fish hooks and a hammer, really nasty and I couldn't watch that part, there's also some downright strange moments throughout the movie, I thought overall that it would have done better had it had shorter stories (therefore not feeling like it was dragging on) and a bit more time spent in the pawn shop.

The end of the movie had us going "what the hell!" and there's a suggestion of what is really going on in the movie online, that makes more sense had that been the route of the movie. In the end this just wasn't that funny nor that well done, so I'm highly doubtful that I would watch it again.

You can't cheat death. You can't hide from death. But you may be able to create a rift in death's design...

On the first anniversary of of that infamous plane crash, a group of teenagers are travelling Route 23.

Suddenly one of them has a vision of an apocalyptic car pile-up that kills hundreds of people. Or is it a premonition? By stopping traffic behind her, Kimberly (A.J. Cook) saves the group from ... more...