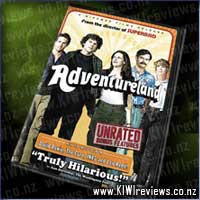 From Greg Mottola, the director of Superbad, this is the hilariously human, semi-autobiographical comedy of uptight, over educated college graduate James Brennan whose big plans to spend summer in Europe and discover "real adult life" are upended when his family suffers an economic down turn. Next stop ADVENTURELAND, where James' only summer trip is a minimum wage job manning a game booth so bankrupt, no one is even allowed to win the giant stuffed panda.

In this, the wildest ride of his life involving a dizzy making romantic triangle, James finds himself right on track to a savagely funny, yet sweetly heart felt, unexpected encounter with the adulthood he was seeking. Also inhabiting ADVENTURELAND is a slew of young movie talent including Kristen Stewart, Ryan Reynolds, Martin Star, Kristen Wiig, and Bill Hader.

I had to watch this film twice, just to decide what I actually thought of it. The first time around, I was distracted by the constant use of marijuana and the way Kristen Stewart always runs her hands through her hair when she's stressed (she does it as 'Bella' in 'Twilight' and as 'Lucy' in 'In the Land of Women' too)...

But the second time, I gave up being super critical and found myself having fun. Jesse Eisenberg is amazing. Super cute and so believable - this film is worth watching just for him. The whole story was actually really sweet and kind of satifying. Once I finished it, that second time, I realized that life can be seen as a sort of prologue to those few perfect moments that make it all worthwhile. Adventureland is just that, a wild, hormone driven prologue to one perfect moment, and for that, more than anything else, I think it is worth having seen.

After an ancient truce existing between humankind and ... more...