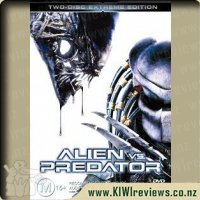 The iconic monsters from two of the scariest film franchises ever, battle each other on Earth for the first time on film. The discovery of an ancient pyramid buried in Antarctica sends a team of scientists and adventurers to the frozen continent. There, they make an even more terrifying discovery: two alien races engaged in the ultimate battle.

If you are expecting a huge battle between predators and aliens, well you will be disappointed. The plot follows a structure that is discovered after a heat signature is picked up. Humans go in to investigate, and get caught in a battle between aliens and predators. Huge is not a word that I would use, however. The arena proves to be little more than a deadly version of a rodeo, With the predators being sent in to get their first kills, from aliens that haven't had a chance to do anything yet.

I was honestly hoping for some kind of planetary invasion. Perhaps the aliens infecting a predator base or something. Something that would have held more value. But this was nothing more than as let down. The graphics were as good as you would expect, and the changing layout of the 'hunting grounds' was inventive, but ultimately couldn't save this film.

This film includes all the re-hashed bits that we have come to expect; aliens bursting out of chest cavities, acid saliva, predator invisibility, and predator technology. But it was nothing new, and was less than impressive. How this film managed to be a sequel, is far beyond me. I have watched this film once, and have no intention of watching it again.

Alien vs Predator is an attempt to market old characters to a new generation of movie goers.

You can't say they didn't warn us. "Whoever wins, we lose" and it's trues, Alien fans lose, Predator fans lose, horror fans lose and anyone looking for a decent storyline loose. The movie starts off strange right away, not only by suddenly placing the Aliens in the present but telling us that they have been here for years. A survey team from Weyland Industries notes an odd heat signature from what should be a barren region of Antarctica and of course head out to find what is going on, discovering a huge infrastructure under the ice.

The strongest character of the movie is Alexa Woods, also the only survivor (cause there's always go to to be one survivor) and she's the only one with any bones to her, there is nothing done to flesh out any of the other characters in the movie, and why bother when they are just part of the body count. The plot to this story just seems so silly, that Aliens and Predators have been on Earth/coming to Earth for centuries, this movie here is the one that sent both franchises down the drain, so far down you would have hoped they'd stayed there.

Fans of the original films need not apply here.