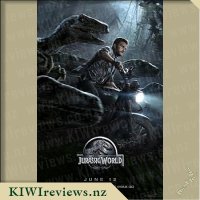 Visually I am blown away by how far we have come with movies. You could honestly beleive these majestic killing machines where real and that there really is this awesome park that you could vacation at. The movie itself has me hoping that this park will one day eventuate - floating down a river while dinosaurs roam on either side of you or seeing the most amazing crocodile snap a shark in half really blows my mind. It really seems like such a wild ride.

Unfortunately the movie itself did not live up to all of me expectations. It is predictable 'killer dinosaur goes on a rampage'. It has awesome special effects but the story was slow, tedious and a tad boring in places. As usual there are the children that need to be rescued and people die but I have seen it all before. There was no real surprise to the story line. In saying that it was refreshing to not have Sam Neil or Jeff Goldblum in the movie but I felt like this movie was a little flat in places.

I did like the spin with the Raptors and how you could, kind of, train them. They turned out to be the heros of the story which was nice for a change. I loved seeing these amazing creatures walking around but I would of liked to have seen more and not the boring 'oh no a dinosaur is going to kill me' story. One thing which did surprise me was how much feelings it brought to the surface as the Long Necks lay dying on the field. You truely had your heart strings tugged at. The movie had its moments but I would just of liked more. I can be honest and say that a lot of the films that I have seen lately, have been below my expectations. Either rating okay to poor, I was concerned that perhaps I was just being too critical. Jurassic World has removed those fears. This film has straight away jumped to the top of my list of the best movies of 2015.

Being in my mid-20s, it's safe to say that I have always had a soft spot for the Jurassic Park franchise. This film provides everything that we expect for a successful sequel; a compelling cast, the perfect mix of action and comedy, the return of previous characters (including CGI ones!), and plenty of references to the original film. Considering the plot has always covered the same story of "create dinosaurs, add public to fund it, dinosaurs escape, insert havoc", it was great how the writers managed to find ways to create original plots.

The casting of Chris Pratt and exotic Jeff Goldblum (Masrani, played by Irrfan Khan) were brilliant. Pratt provided a great balance of professionalism, comedian, and lovable rogue. Masrani had all the charm of an eccentric billionaire, and the looks of Jeff Goldblum. The comparison between Khan and Goldblum is made even more hilarious due to the differences in Pratt's appearance during the film (it rapidly changes between dark tan and albino white).

Beyond the casting of those two characters, the human storyline is rather dull and predictable. But that predictability keeps you grounded in a film that has you questioning what direction the film will go. The more exciting part of the film is obviously the use of the dinosaurs, and the side-by-side storylines of the raptors and the Indominus Rex.

This film put me in a good mood. There are many parts of the film that you question, and overall you laugh at the management of the park; from the appalling security guards, to the poor safety on the rides, there are aspects that you can't help but think that in real life it would have been long ago shut down or sued for Health & Safety failures. Not to mention the huge comparison to the "Blackfish" situation with SeaWorld in real life.

But the main reason that I feel this movie appeals is that it finally allows us to empathize with the dinosaurs. They aren't just random creatures. You are saddened when they die, you differentiate between the different dino-characters, and for once, we get to cheer on the raptors.

The Pearson kids use their wits, courage and video game-playing skills against some feisty, little green aliens who crash-land on the family's vacation home. But the toughest part for the kids will be keeping this whole thing from their parents!