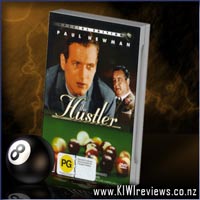 Disclosure StatementFULL DISCLOSURE: A number of units of this product have, at some time, been supplied to KIWIreviews by the company for the purposes of unbiased, independent reviews. No fee was accepted by KIWIreviews or the reviewers themselves - these are genuine, unpaid consumer reviews.
Available:
15th September 2005

"Fast" Eddie Felson is a small-time pool hustler with a lot of talent but a self-destructive attitude. His bravado causes him to challenge the legendary "Minnesota Fats" to a high-stakes match, but he loses in a heartbreaking marathon. Now broke and without his long-time manager, Felson faces an uphill battle to regain his confidence and his game.

It isn't until he hits rock bottom that he agrees to join up with ruthless and cut-throat manager Bert Gordon. Gordon agrees to take him on the road to learn the ropes. But Felson soon realizes that making it to the top could cost him his soul, and perhaps his girlfriend. Will he decide that this is too steep a price to pay in time to save himself?

) when the opportunity came up to review the movie that influenced The Color of Money, I just had to see it.

When the packaged arrived I ripped it open and there on the cover were two greats of the early sixties film era Paul Newman and Jackie Gleason in colour. Now I'm a bit of a purist at heart and I firmly believe that older Black & White films should not be colourised, as I feel they just don't have the same feel to them. So I flipped over to the back and had a quick read and there it was 'FEATURE RUN TIME: 129 MINUTES - COLOUR'. "Oh well," I thought, "it will still be a good movie to watch," so I slid the disk into my player and my spirits were lifted... it was still in good old B&W, no sign of colour anywhere.

With my mood greatly improved I sat down to watch and enjoy a classic movie, it is a gripping tale of one man's struggle to be the best, but at the expense of happiness. Paul Newman does an outstanding job of playing the troubled Fast Eddie Felson whos only goal is to beat the legendary Minnesota Fats (played by the amazing Jackie Gleason) until he meets Sarah (played by Piper Laurie), when he becomes torn between his love of the game and the love of his woman, but which will he choose?

Whilst the pool scenes are not quite as numerous as I would have liked, there is still some amazing pool playing to be seen, as well as the extras on the DVD such as the demonstrations and explanations of some of the various trick shots played in the film.

Overall this is fine example of classic cinema and will be retaining a place on my shelf for a long time.

Score: 8.5
Product reviews for listing 858: Do Not Adjust Your Set -  Directed by Ian Fordyce

Teatime. 1968. In millions of homes something strange was happening and TV comedy around the world would never be the same - 'Do Not Adjust Your Set'. Hitting audiences like a wet fish in the face it was weird, wonderful and hilarious. 'Do Not Adjust Your Set' combined the writing and performing skills of Eric Idle, Terry Jones and Michael Palin, added a dash of David ... more...