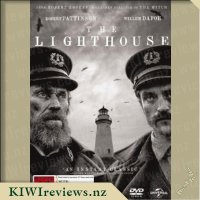 From Robert Eggers, the visionary filmmaker behind modern horror masterpiece The Witch, comes this hypnotic and hallucinatory tale of two lighthouse keepers (William Dafoe and Robert Pattinson) on a remote and mysterious New England island in the 1890s. As an approaching storm threatens to sweep them from the rock and strange apparitions emerge from the fog, each man begins to suspect that the other has become dangerously unmoored.

This is the sort of movie that is going to divide audiences. I am glad I watched it with several others because opinions were mixed - some thought it was clever and innovative, one thought it was reasonably interesting, and one thought it was boring! I think it does have to be approached with an open mind because it certainly pushes boundaries in the art vs entertainment categories. It is described variously by IMDB as a psychological drama, a horror movie, and a fantasy - and it does have aspects of all these genres. I also found my own background in world literature helped to make the links to various writers. I watched it twice, but I think I need to see it a third time on a bigger screen as I am sure there are aspects I missed on the first two viewings.

The story itself is relatively uncomplicated. Two men - Wake (William Dafoe) and Winslow (Robert Pattinson) are stuck with only each other for company and have to survive a month on an isolated island as lighthouse keepers. The combination of bleak surroundings, inhospitable nature, and the men's own personal baggage all contribute to a breakdown in their emotional resilience; ultimately neither copes with the challenge and each becomes a victim in turn. Coupled with the realism of the background are the hallucinations that both experience. These are interwoven with the story so at times it is difficult to tell what is real and what is generated by their own memories and fears. The men are portrayed simultaneously as depraved, drunk, sexually deprived, and ultimately murderous; and as objects of pity as they battle stormy weather and a fate preordained by a supernatural power.

Fate plays a major part in the movie, harking back to the Promethean myth of Greek mythology. Early in the story, the one-eyed seagull which attacks Winslow is disposed of in a way that reminded me of the death of the albatross in Coleridge's The Rime of the Ancient Mariner. Killing the seagull puts a curse on Winslow because he has upset the balance of nature. From here on, the destiny of both men is inevitable; monsters worthy of HP Lovecraft, Franz Kafka, Stephen King, and Edgar Allen Poe assault the senses of both protagonists and their audience. The ubiquitous foghorn further adds to the surreal ever-present sounds of wind and waves. It is worth noting that there is no dialogue at all during the first seven minutes of the movie; only the sounds of nature interspersed with silence can be heard.

Since the story is set in the 1890s, the film was made in black and white with a square frame. Strategically applied lighting ensures that the images are sharp - an important consideration when much of the footage was taken in low light during the storm or inside badly lit interiors. This monochromatic presentation, and the actors' clothing and sparse, primitive furniture, convey a world set at a time when indoor plumbing was rare and communications were primitive. At the beginning of the storm sequence, the cinematography is little short of brilliant. The power of the clouds rolling in and the surging waves are shown without colour; shades of black and white are skilfully merged to show the strength of nature at its most aggressive. Another powerful sea image is the representation of the shell; this appears through various shots of the stairs as seen from above and also in the patterns on the surface of the water.

Birds appear as a portent of doom; after the death of the first seagull, the rest of the colony appears at intervals to add to the menace of nature at its most furious. I immediately thought of Alfred Hitchcock's The Birds: no doubt that was the inspiration for this inclusion. The addition of sea shanties and drunken dancing add a macabre element of black humour to the plot as the relationship between the two men appears to improve and then to disintegrate. The lighthouse itself is a source of safety, a thing to be worshipped by sailors and lighthouse keepers alike in its role as guardian of the sea. Like a moth to a flame, Winslow is drawn to approach the light without any regard to danger.

Included on the DVD are three short documentaries collectively entitled A Dark and Stormy Tale. I found these fascinating insofar as they answered some of the questions I had been puzzled about in terms of the mythological references and the characters' back stories. Having seen the documentaries, I then watched the movie for a second time and found I understood it a lot better. My companions also watched it again and agreed that they appreciated it much more on the second viewing. There were even times when I felt that there was just one lighthouse keeper and that Wick and Winslow were personas of the same conflicted man, especially when they both claimed the name Tom; certainly, there was some blurring of the two characters. But nobody agreed with me!