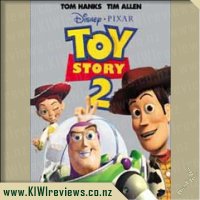 Woody (Tom Hanks) is stolen from his home by toy dealer Al McWhiggin (Wayne Knight), leaving Buzz Lightyear (Tim Allen) and the rest of the gang to try to rescue him. But when Woody discovers that he's actually a valuable collectible from a once-popular television show called "Woody's Roundup" and is reunited with his horse Bullseye, Jessie the yodeling cowgirl (Joan Cusack) and his faithful sidekick, Stinky Pete the Prospector (Kelsey Grammer), he doesn't want to leave.

A few years have passed and the toys are starting to feel neglected so when Woody is kidnapped and learns he a very valuable toy he wants to stay as he thinks that being a valuable toy means he will be played with and the other toys decide they have to rescue Woody. We are introduced to Jessie and learn her heart breaking tale.

The kids enjoyed the first movie so much that I knew buying this one would be a good choice, the toys are still facing problems that most kids don't even think about and the movie shows the things from the toys point of view really well. I was surprised to see how the kids would play and take various roles and not be worried about the girls playing female roles and boys having to play the boy roles, most the time the most popular roles were Buzz and Woody.

This movie also showed how silly adults can be and how very child like they can be given the right circumstances. The animation was great as you can expect from a large name studio. The kids thought that the names were really funny and wouldn't stop laughing about Stinky Pete, it was good to see the supposed bloopers the end.

In Toy Story 2 we reunite with the characters that we know and love from the first movie, but this time Woody gets separated from the rest of the clan when attempting to save a fellow toy from being sold at the families garage sale. A toy collector sees Woody, and when Andy's mother refuses to sell him, the toy collector steals Woody for his set. Thus we have Buzz and crew setting off to find Woody and bring him home, and Woody meeting new characters, some of which become part of the clan.

I didn't enjoy this movie as much as I did the first Toy Story movie, in fact, out of the three movies I would have to say that this is my least favorite movie out of the trilogy and as such I haven't watched it as often, in fact, even my three children lean that way, watching the first movie a heck of a lot more than they have watched this film. The plot is lost of fun and the voice actors do a great job, this has a stellar cast and this is a great sequel and addition to the toys are alive storylines.

Xixo is back again. This time, his children accidentally stow away on a fast-moving poachers' truck, unable to get off, and Xixo sets out to rescue them. Along the way, he encounters a couple of soldiers trying to capture each other and a pilot and passenger of a small plane, who are each having a few problems of their own.