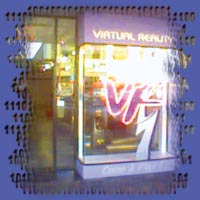 Located across from Kelly's Super Mall, You can't miss our Neon front window.

By wearing an HMD (helmet mounted display), the user is transported into cyberspace and experiences a virtual world generated by the computers. This is effected to the user via a three dimensional display and stereoscopic sound to give as true a sense of reality as possible. The user can then interact with that virtual world. A 6DOF (six degrees of freedom) tracker tells the computers which way the user is looking and displays the appropriate information. A hand held controller or virtual gun permits interaction with the VR world.

The SU2000 allows the user to interact with another person in the virtual world, either communicating with each other or shooting each other.

Games include:
SU 2000 Dual VR Unit: Two units are networked together so that you can play the following games one on one or by yourself.     •  Pac-Man: You become PAC-MAN himself.     •  Zone Hunter: Move from zone to zone as fast as possible to kill the baddies!     •  Shoot for Loot.     •  Dactyl Nightmare: A no-holds-barred shoot-out.     •  Dactyl Nightmare 2: Race for the eggs.     •  Ghost Train: Play this game to experience the ultimate roller-coaster ride of fun and terror.     •  Virtual Boxing: A virtual world boxing experience.

Winchester Total Recoil: Experience life like shotgun, complete with simulated recoil.
•  Zero Hour: plays like other shooting games but has a major difference – you are actually there and not just staring at the screen, this really is 360 degrees of shoot out.     •  Trap Master.     •  Clay Master.     •  Skeet Master.

Players who need some guidance get pointers from the world's first immersive shooting coach who is there to help with aim, leading and wind judgment. And the shotgun gives a kick when you pull the trigger!

More details can be found at: www.totallyvr.co.nz

A long time ago, in a galaxy sorta not really all that far away at all, I had the great fun of seeing the Cadbury's Wobbly-bar Promo Roadshow touring, and it came to the local mall. For the cost of three cadbury wrappers (at least 1 of which had to be a Wobbly bar), I had chance to climb onto a platform surrounded by a ring, stick a bulky helmet on my head with wires trailing back to the rig, grab a wierd handpiece and pretend I was in another reality, shooting people who blew up and reformed somewhere nearby, so I could shoot them again with my grenade-launching pistol. After a few shots, the nasty big green bird would get hungry and come after me. IT WAS AWESOME FUN! I stayed in that rig for hours, taking on all challengers. Way cool!

Then, as all cool things before their time do, the machines faded away to an obscure spacies arcade on Auckland' waterfront, where I briefly enjoyed their services once again. Now, about 7 years later, I am walking down Broadway and see a poster of the newer models, HERE IN TOWN! I grabbed my cellphone, made a right norka out of myself when I asked the owner over the phone where his shop was located... (I was standing outside it and hadn't seen the signage!)... so during my lunchbreak I popped back and had a chat to Trev.

After a bit of a trip back down memory lane, I got to have a blast! Whew, SO far out of practice, but Trev said I did pretty good for a first-timer on that upgraded version of Dactyle Nightmare. So I got a bit cocky and had a shot at the Carnival Shooting. Took a bit to get used to the way the gun aimed ingame, but after a little while I was having a real blast, and probably looking damn stupid to any passers by, a few of whom must have been entertained, for they came in and started talking to Trev... and no matter how often I looked in the direction of their voices, all I could see was rubber ducks and ufo's to shoot... man, that was a wierd feeling.

These were just two of the many games online there, and more to come too! Awesome fun.

The shop is still a little sparce on the atmosphere and decorations, but who cares, it's not the shop you are there to look at, is it?! It's small, but the machines are pretty self-contained, and there's plenty of room for an audience of mates to cheer you on while they watch your progress in the TV monitors around the rigs.

All they need now is a couple of couches and some popcorn makers and it would be a cool Stag Night entertainment, Company Fun Night Out, Social Club event... whatever you can imagine really.

Overall, way awesome, and I am looking forward to going back... and their 1-on-1-for-1 Tuesdays are a great idea! (Bring a mate to play the 2-player games and you both play for the price of one.) And considering the amount of games out there designed specifically for Total Immersion VR rigs, the choices are amazing... there has to be something here for anyone to play.

Based on the best-selling novels by James Herriot, All Creatures Great and Small is a wonderful, heart-warming series that the entire family can get together and enjoy. Series Four sees much of the material taken straight from Herriot's fourth book, "The Lord God Made Them All', and is somewhat more serious than the previous three series'.

The setting is now the early Fifties, and the Dales are still suffering ... more...