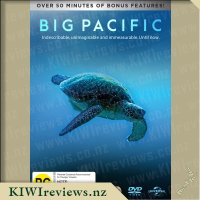 Disclosure StatementFULL DISCLOSURE: A number of units of this product have, at some time, been supplied to KIWIreviews by the company for the purposes of unbiased, independent reviews. No fee was accepted by KIWIreviews or the reviewers themselves - these are genuine, unpaid consumer reviews.
Available:
November 2018

The Pacific Ocean covers one-third of the Earth's surface. It is greater than all of Earth's land combined, holds half of our world's water, and hides the deepest place on our planet. It is where huge and iconic, rare and dazzling creatures call home - and where creatures yet to be discovered lurk.

Over four cinematic episodes, Big Pacific breaks the boundaries between land and sea, moving throughout the Pacific Ocean to present a broad range of locations, species, natural phenomena and behaviours. Each episode focuses on an iconic characteristic of the Pacific: Passionate, Voracious, Violent, and Mysterious.

Filmed in cinematic 4K, Big Pacific will present the ocean and its denizens in ways never before seen on television - exploring the monstrous to the minute; the alien to the intimate.

Of all the documentaries I have seen, this ranks as one of the best. Coming from a family of sailors and consummate adventurers, I am programmed to take a strong interest in stories with a maritime setting anyway, but this went way beyond a simple "sea doco". It is one of those series that I could watch again and again; seeing it once would not be sufficient as there is so much to marvel at, so much to learn. I watched the full five episodes back to back twice over, and am now on my third watching. The first time was on a laptop screen, but when I watched it on a big TV screen, I noticed things I had not seen the first time round. And this time I am discovering yet more. The cover descriptor ("Indescribable, unimaginable and immeasurable. Until now.") says it all - and for once, this is no exaggeration.

The two discs comprise a total of five episodes, four with the main chapters (narrated by Daniel Dae Kim) and the fifth with an overview of the production process (narrated by Dan Nachtrab). Both narrators are very easy to listen to. This is immensely important when you are trying to catch every word. There is nothing like a voice which grates on you to make you turn the sound down! However, in these episodes, the words are just as important as the visuals. There is no choice - you have to give both your full attention in case you miss something. The background music and sound effects blend into the action so seamlessly that often we did not register them at all!

Throughout the five episodes. the cinematography is nothing short of stunning. It borders on 3D at times due to the studied placement of lighting, and the carefully thought out camera angles. The "Behind the Scenes" episode which documents the documentary examines just how challenging some of these shots could be, and how much planning had to go into them. Some of the areas the film crew had to work in presented dangers that do not occur on land. I felt my respect growing for them as, in common with many others who view the finished product, it would never have occurred to me that there were many more dangers than those just presented by the odd hungry shark.

The first time I watched the series (on my laptop) there were just two of us; the second time, when I watched it on a TV screen, there were five others present, so altogether there were seven of us who got to see it. Ages of the audience ranged from 11 to nearly 80, so we had a good cross-section of people. Every single person agreed with my reaction; they could not get enough of it. There was no question of turning off the machine after the first episode; we went right through to the end.

Episode 1 ("Violent") starts with the narrator telling the audience "Pacific means Peaceful" and then proceeding to demonstrate in as many ways as possible just how un-peaceful it is in reality! Crocodiles, snakes, and other scary creatures both in and out of the water vie for being the most dangerous of all. Until we started watching, we had thought that the series dealt purely with life under water, but the areas on the shoreline around the Pacific Ocean are also included. We loved the way a map appears each time there is a change of place so that the viewer knows exactly where the footage has been filmed. Volcanoes, tsunami and the effects of nuclear testing are included as examples of the violent Pacific, surpassing the flora and fauna of the area in their potentially devastating effects,

Episode 2 ("Mysterious") had us spellbound with the amazing patterns on the Japanese seabed. Starring the rare white-spotted puffer fish as the resident artist, this segment was probably the highlight of the whole series. We rewound it several times to watch it again; not only artists, but mathematicians and graphic designers would be amazed by this process. The other highlight was the sea turtle graveyard off the coast of Malaysia, first described by Jacques Cousteau 20 years ago. However, modern film techniques have now made it possible for the viewer to explore the graveyard with stunning clarity.

Episode 3 ("Passionate") is all about survival. Some of the mating rituals are similar to those of inland animals and birds, while others are quite bizarre! Our favourite part of this segment was the forest walk of the yellow-eyed penguin as he returned to his mate and chicks with their dinner. This had everyone laughing because he looked so much like a human after an evening out at the pub as he waddled from side to side. However, the sea otters are so violent that the male can actually drown the female during the mating process! On balance, we decided we preferred the penguin.

The tag-line of the last episode ("Voracious") has to be Eat Or Be Eaten! It highlights the vast differences between sea creatures, from those who need to eat constantly to those who go a year between feeds, from the biggest mouth in the sea (which belongs to the blue whale) to the creatures who boasts a hundred little mouths rather than one big one! Our favourite segment here was the section featuring the lionfish (aka The Terminator) who looks as though he is about to go to a Mardi Gras. European-style accordion music accompanies his movements as he stalks the bluestreak wrasse, vibrant in sleek blue and green stripes. They move around each other as if performing a ballet, making us all laugh once more.

In conclusion - we all loved the series. My friends plan to watch it again, so they will just have to get their own copy. I am not giving them mine; I intend to finish watching it for the third time and will probably return for a fourth. It is simply wonderful.

Grab your mouse ears and get ready for the ultimate interactive event at 'Disney on Ice celebrates Mickey and Friends'. For the first time ever, see fearless Moana on a high-seas adventure with demigod Maui.

Follow the unforgettable Dory through the unexplored seas of the Pacific Ocean, join the Toy Story pals on the exciting ... more...