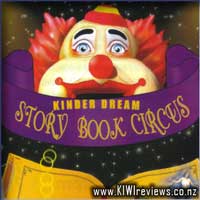 Step inside a magical clown and experience the wonders of the Storybook Circus.

A young boy dreams that he goes to the circus and is amazed by world-class acts, featuring contortionists, high wire, juggling, a clever little horse, and not forgetting the clowns!

This is an amazing circus touring New Zealand for the first time! There are no caged or exotic animals. Enjoy the excitement, fun and laughter for all ages.

We arrived at the tent a little before show-start, which was at 7pm this night. It was cold outside, so it was great to be inside a heated tent. As we sat down, we were surprised to see one of the performers snap our picture on a digital camera. I didn't think much of it at the time, assuming it was for their scrapbook or something, but the answer was revealed later. The cold and rain had obviously put a few patrons off, since there were at least half the seats empty by the time the show started. Kids were wriggling and laughing and talking, parents were -shush-ing and trying to maintain a close approximation of order, and the sounds of wind blowing outside were bringing gloomy thoughts of impending rain. However, all this was soon forgotten as the opening scene fired up. After much flashing light and booming voice, the first performance was the talented hoop-spinner. Such supple dexterity, and even when she let a hoop slip, it was back in thw swing of things with a twist of an ankle and a twitch of the knee.

After that, and a quick clown act which had the kids howling with laughter, (and a few patron wishing they had umbrellas) we came to the balancing act. A talented performer balanced and wrapped herself around a BMX bike on a raised stand. This was quite impressive to the adults, but the kids started to fidget by the end. However they perked right up when an alpaca and a huge goat came out to do a see-saw act guided by one of the clowns. This was followed quickly by a dog act. The poor old pooch had seen better days, but obviously loved his job because he put such effort into making a good show, right to the finish where he walked out on his hind legs. Shortly afterwards the pole act began, with a type of trapeze act in a steel hoop held aloft by the strongman of the troupe. Quite unusual, not quite like any other act I have seen, so it was interesting to see what kinds of contortions she put herself through.

The family of tumblers was on next... Mum, Dad and Junior. The lad was flipped, balanced, tumbler and thrown around mostly by Dad, while Mum wandered around trying to seem like part of the act. She played a key role in a few places, but was quite obviously just eye-candy for most of the act. At the end of this act, the lights went out, and we were treated to a blacklight hoop trapeze performed by our highlight performer, the hoop-spinner. Nothing too spectacular, but doing it with only UV lights made it something stunning to watch. Then intermission came along, and it was time to go hunt down a wild hotdog or two and see if we could traps a few cans of drink. Just before the show started again, on of the staff came wandering past with a handful of what looked like keyrings. Sure enough, they were! Here at last was the explanation for the photo up front... as a little trinket reminder of the trip to the circus, we were offered the chance to buy a keyring with the circus logo on one side, and our family photo on the other! I was quite impressed with the concept, and pro-active sales effort, so handed over the $5 and gave my young son something cool to remind him.

After intermission was over, the second-half's first act was a rope act, with our favourite the hoop-spinner, climbing a rope and spinning and tumbling around. Nothing unique, but she did a great job of it and I could hear that the kids were impressed. This was followed by the 'clever horse' act which was performed by the cutest, chubbiest, mini pony I have ever seen. After the pony took it's final bow and wandered casually out, a buff young man came on and did the aerial straps act, in which he swooped and spun around and above the ring on two straps wound around his arms. If you know the Olympic sport 'the rings' this act was very similar, though a bit more showy, naturally. A stunning performance of upper-body strength. Another quick interlude with the clowns, then into the contortionist act. Two lithe young ladies twisting themselves in ways that had me gasping in sympathy pains at the mere thought of putting my middle-aged body through those kinds of bends. Impressive, if worryingly pretzelesque. Afterwards, Mr & Mrs Tumbler returned to do juggling. Even the odd dropped tool wasn't a worry, as he deftly used his feet to flick them back up into the arching flow of batons, balls and even hankies! The latter was done in time to music, which was quite impressive in itself... trying to keep a bunch of flimsy cloth squares floating short enough to stay to the beat, but long enough to remain in catchable range was a skilled feat indeed.

The final act of the evening was the high-wire. With a unicycle, much dancing, and even a few 'accidental slips' thrown in for thrills (which had some kids howling with delight, and a few covering their eyes in fear for the poor lad's life) it was a good way to end the evening. Sure enough, after he had shimmied back down, the lights dimmed for final scene wherein the young boy is seen sleeping in a corner and returned to his bed and dreams by the entire circus troupe, who took their final bows and shot out back. Lights up to full, please take your rubbish with you and deposit it in the bins located by the main exit, thanks one and all.

Overall, this was definitely more a circus for the kids than the adults, but it was still quite good for a small travelling troupe. An offshoot of the main Weber Bros Circus show, this is their first show. Thus it was no great surprise that I spotted a few faces familiar from the Splash show they did last time they passed through town. Not quite as impressive, but still with the same aura of awe and wonder any good circus can generate in the audience, young or old. So, if you see it passing through your town, grab any kids under 10 and head on down for some good, clean family fun.