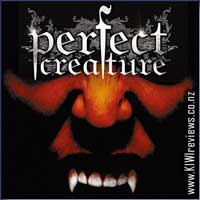 New Zealand movies have an overall reputation for low budget, low quality, and an overabundence of Shortland Street stars raking in a few extra bucks on the side. Notable exceptions to this sterotype were, of course, the the Lord of the Rings trilogy and perhaps King Kong, but personally I felt even that one stretched the limits of bearability in places. So I wasn't at all sure what to expect when I found out this was another Kiwi flik...

It wasn't far into the movie when I picked up enough of the 'vibe' to realise I was actually quite enjoying it... sure, it was a bit slow in places, but when the action was slow, the thought-provoking element was on a high... so for me, there was never a dull moment. Some of the Intelligencii aspects I enjoyed was the juxtapositioning of Vampires, from their traditional role as horrific, leeching, scary, boogeyman roles in most stories, to a role hardly different from priests in traditional Catholisism. They are worshipped as protectors and supreme beings, annointed as the next step in human evolution. Faithful attend church services where they make offerings in the form of blood donations, and in return the sick, elderly and infirm sometimes receive drinks of the blood of the Brothers, which unlike in tradition vampiric tales, didn't convert the supplicant into a vampire, but instead provided serious healing and recuperative powers for a short time. A mortally wounded human who drinks of a Brother's blood will survive long enough for traditional medicine to stabilise and cure them usually, in this world.

The main protagonists in this movie were quite intriguing... a human cop with a touch of religious intolerance, forced to reassess his standpoint, like it or not, in the face of the evidence... a vampire enforcer required to hunt down a renegade Brother, in more ways than one... and a psychotic vampire human-killer who started out trying to be a saviour and ended up trying to become a messiah. Throw into this mix a few dark secrets, a bit of a love story, an almost apocolyptic ending... and I walked away feeling very thoughtful... however, I seemed to be in the minority, as many of the other viewers sounded a little let down by the movie.

Overall, it might not be your thing, but it's worth seeing at least once to find out. It could be a movie that pops up in your head at odd moments, triggering profound thought, or it could be a waste of money... only you can tell... but I for one will be seeking this one out when I have some spare cash and it's on sale.

Ed Skrein assumes the iconic role of Frank Martin. We meet the younger version of the former special-ops mercenary, now an independent agent contracted to transport classified packages for questionable people. When Frank's father pays him a visit their bonding weekend is interrupted by the plans of femme-fatale, Anna, and her three seductive sidekicks.

Frank must use his covert expertise and knowledge of fast cars, fast driving and fast women in an attempt to outrun a sinister Russian kingpin.