Rock Around the Kitchen review 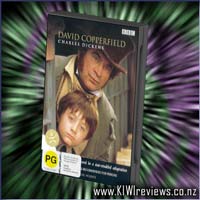 Disclosure StatementFULL DISCLOSURE: A number of units of this product have, at some time, been supplied to KIWIreviews by the company for the purposes of unbiased, independent reviews. No fee was accepted by KIWIreviews or the reviewers themselves - these are genuine, unpaid consumer reviews.
Available:
4th Nov 2004

"Like many fond parents, I have in my heart a favourite child, an his name is David Copperfield." Charles Dickens

And here Dickens' own favourite and most enduring novel bursts onto the screen in a dazzling adaptation, with a truly world-class cast bringing alive some of the most famous characters in fiction. Bob Hoskins as the ever-optimistic Mr Micawber; Maggie Smith as David's fearsome aunt, Betsey Trotwood, Trevor Eve as the sadistic Mr Murdstone; Nicholas Lyndhurst as sly, sinister Uriah Heep; Pauline Quirke as David's loyal friend and servant. Peggotty; and featuring Ciaran McMenamin as David, with Harry Lloyd (the I15 year old descendent of Charles Dickens himself) as the young Steerforth.

A timeless story with universal appeal, this rich adaptation combines suspense, scandal and redemption in a production that will delight and entertain all the family.

The boy who plays Harry Potter and the lady who plays professor Magonagle are in this film. They are very good.

This is truly an all-star cast, from the cream of English television and theatre. There are a number of what at first seems a surprising choice of actor for some of the roles, however, having said that, the actors are very convincing in their roles and the production works exceedingly well.
The BBC have always led the field for producing costume dramas, no doubt on smaller budgets than American filmmakers could ever hope to achieve, yet nothing is skimped on, the sets are lavish and the costumery sumptuous; the locations are stunning and the production exceptional. The actors exude professionalism throughout this film.
One of the highest accolades that could be paid to this production is if it holds the interest of a younger person, rather than switch off and play with their x-box or some other form of entertainment. I hope that this film will encourage the reading of the book. My daughter (aged 7), has not only watched it, but watched it twice, thoroughly enjoying it both times, and I can quickly see it becoming one of her favourites. She has become quite adept at picking out other actors and actresses who star in her other favourite films, the Harry Potter series. Having said that, David Copperfield features what may be the first film outing of Daniel Radcliffe, whom we all know, has gone onto greater things, starring alongside a number of the cast of this production.
Whatever the BBC do, they always complete their projects in an exceptional manner, and this production of David Copperfield is no exception, and I look forward to seeing more of their productions in future.

Very true to the classic novel, this adaptation draws the viewer into the tale of young David, a post-mortem child, born into the care of his mother and her housekeeper, father 3 months under the earth by that time.

I was really impressed by this movie. Having read the novel only in skimmed form, I was absorbed by the tale as it unfolded before me on the screen.

With a lot of famous faces popping up, it was funny to see the relationship between the young David and his enstranged Aunt Betsy... played by Daniel Radcliffe and Maggie Smith, also known as Harry Potter and Professor McGonagle.

Overall, this has to be a classic in it's own right... a wonderful adaptation of a brilliant novel. Full of passions both powerful and pure, hearts both glowing and black, trials that a boy of todays age would tremble at, but were faced with stoutness back then... it is a doorway to another time, another life, as real as any other we see on our screens these days.