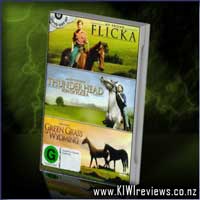 Disclosure StatementFULL DISCLOSURE: A number of units of this product have, at some time, been supplied to KIWIreviews by the company for the purposes of unbiased, independent reviews. No fee was accepted by KIWIreviews or the reviewers themselves - these are genuine, unpaid consumer reviews.
Available:
Nov 2006

Titles included in this box set are:
•  My Friend Flicka
•  Thunderhead: Son of Flicka
•  Green Grass of Wyoming.

My Friend Flicka: (1943) In this touching family film based on the celebrated novel by Mary O'Hara, ten-year-old Kenny McLaughlin, a rancher's son, deperately wants a horse of his own. When his father finally agrees to let him choose a foal, Ken picks Flicka, a beautiful but high-spirited filly who comes from a bloodline considered to be hopelessly wild. It is up to Ken to prove Flicka is tamable or risk losing her. Along the way, Ken and his family learn some important lessons in this poignant tale of love, patience, faith, and "hope beyond hope."

Thunderhead - Son Of Flicka: (1945) In this sequel to the heartwarming classic My Friend Flicka, Ken McLaughlin (Roddy McDowell) sets out to raise the rebellious offspring of the famous mare. Although the young albino colt presents many challenges, Thunderhead also proves very helpful. And when it becomes apparent that the beautiful Thunderhead can race, Ken enters him into competition. But after an injury and an unexpected confrontation, Ken realises that the majestic animal is destined for a life of freedom amidst the stunning landscape.

Green Grass of Wyoming: (1948) Based on a novel by Mary O'Hara, who also wrote the "Flicka" and "Thunderhead" series of horse stories, GREEN GRASS OF WYOMING has a good blend of human and animal relationships. On the human side is Cummins, the niece of ranch owner Coburn, who falls in love with Arthur, the son of another ranch owner, Nolan. On the horse side, the romance involves a black mare owned by Arthur and a wild stallion, Thunderhead. The stallion lures the mare away, but Arthur brings both of them back to the ranch. The story then moves to the racetrack where the climax shows Coburn's horse beating out Nolan's mare, which is about to give birth to the offspring of Thunderhead.

As a kid, I had always adored Mary O'Hara's books, having read them time and time again, and naturally, I was absolutely delighted when I found they were movies as well. As soon as I got the 3 DVD set, I settled down to watch one of my favourite book series brought to life on screen- only to be rather disappointed!! Although the movies themselves were still rather enjoyable, I found that they left some of the major events that happened in the books out, along with, in a few cases, completely CHANGING the storyline!! The first movie, "My Friend Flicka", was the only one out of the three that stuck reasonably closely to the book, although, as to be expected, there were still a few bits left out, along with removing the main character Ken McLaughlin's big brother, Howard, from the movie, and instead replacing him with the ranch-hand, Gus' daughter Hildy... a small, yet still slightly annoying change. But the next two movies, "Thunderhead" and "Green Grass of Wyoming" both deviated on a regular basis from the main story line in the book. A complete change of cast in the third movie proved to be another minor frustration, as I'd found Roddy McDowall to be quite enjoyable as young Ken McLaughlin in the first two movies, along with Preston Foster proving to be well suited as the role of Ken's hard-shelled, yet caring father, Rob.
All in all, if I could get past how they differ from the books, then I would have thoroughly enjoyed them, as will anyone who is a fan of horse movies.