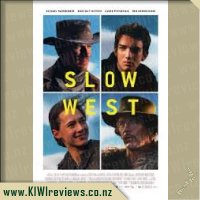 A bounty hunter (Michael Fassbender) keeps his true motive a secret from the naive Scottish teenager (Kodi Smit-McPhee) he's offered to serve as bodyguard and guide while the youth searches for his beloved in 1800s Colorado. This film is described as a western thriller; but the title gives a fuller picture of what to expect. It is an interesting because of what it is; a slow western. While there are many gunfire events and deaths, it is all rather paced with large gaps of travelling in between.

The story is a simple one. Boy loves girl. Boy loses girl. Boy tries to find girl. Of course all is given more drama by the addition of bounty's and bounty hunters. But the film still remained restrained until the climax towards the end of the film. Nothing was really forced on the viewer. It all just slowly trickled along.

The shots were very well filmed, with stunning landscapes and environments, but there could have certainly been better editing around the changes of scene, as I was temporary blinded on multiple occasions by the switch from dead of night to the bright blue midday sun. Michael Fassbender was an interesting choice, and it took a while to stop thinking of it as "Young Magneto" traipsing around the West. But he did well to pull off the personality of a rogue, or "brute".

Surprisingly there were several comical elements to the film that had the entire cinema laughing out loud, as well as some well placed literal metaphors to rub salt in the wounds of the protagonist. But the most interesting thing to me was the lack of regrets and remorse, which I suppose would be a thing of the time. Murder and killing is just a thing that is expected in the West. They may tell stories about it, and some may have bounty's on their heads, but none really have a second thought to killing. Which was quite nonsensical to watch.

All in all, I was not expecting much of this film. The title alone meant that I was watching the film on my own (noone seemed interested in joining me despite me having a double pass), but "Slow West" got some genuine laughs out of me, had some good action scenes, and in the end I can't help but say that I actually enjoyed the film.

The Genies return in an all new adventures!