« Pump Up the Volume review 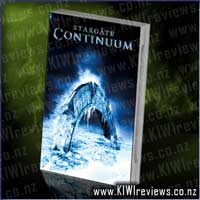 While attending the execution ceremony for the last of the Ba'al clones, 2 members of SG1 vanish into thin air, and General Jack O'Neill is killed.

Fleeing back to Earth, the remainder of SG1 find themselves in a world where the Stargate never made it back to the USA, but was instead sealed in ice in the hold of a ship, and their own history has been erased.

Now they must convince a government and military that the timeline was altered by the original Ba'al in order to conquer Earth, and time is not on their side...

Let's face it... if you can accept that controlled, guided, stable Einstein-Rosen bridges (aka Wormholes) are a possibility, you have to accept the rest is also plausible... a bunch of evil alien clones all trying to take over the universe, the ability to travel in time as well as across interstellar distances, weapons that can blow a hole in a 2ft thick wall but still be small enough to fit into a staff weapon and light enough to carry, energy sources powerful enough to power a small town but can fit in the palm of your hand, etc...

Welcome to the Stargate universe... where wonders are commonplace, and there are 2 paradoxes to solve before breakfast.

Dagnabbit, but I do love this franchise! Since the original movie way back, I have loved the whole *concept* of this show... and here we are, 13 years later and MacGyver is finally starting to show his age, but can still attend a good old fashion lynching half way across the galaxy before lunchtime.

In this awesome addition to the line-up we see how one badguy can take an accidental mishap and turn it into a weapon weak in it's own right, but when applied properly, utterly obscene in it's authority and ability to stuff up reality as we know it. Yup, that good old time-travel mishap from way back, when a wormhole got looped around a star and shunted backwards in time due to a solar flare at just the wrong time. But now Ba'al has a way to predict and control the effect, and use it to alter the past to his whim.

And of course, because he created the paradox, he's outside the timeline when the changes occur, so he retains his memories of the future as it was... so too do the remainder of SG1. This gives rise to some awesome mind-bending plot twists... it's that good old "If I go back in time and kill my grandfather as a baby, that means he won't grow up to sire my dad, which means I won't be born, so how could I be here to back and kill him... but if that's true, then he lives, I get born, so could go back and..." paradox... and trust me, there's a real doozy of one of those in here if you look for it.

The special features and bonus extras are great... I loved the "Layman's Guide to Time Travel" featurette... just the sort of mental chewing gum casual info-sponges like me enjoy watching during dinner, and getting a giggle from the pained expressions on the faces of those who *want* to wrap their heads around it, but just can't seem to get a handle on the concept. Entertainment squared.

Overall, another brilliant StarGate movie... and I really, REALLY hope there are more coming... I doubt there will be, as the plots are starting to wear a little thin in places, but we can but hope. Hey... if the wormholes can be used to loop BACK in time, why not forwards too? Stargate : Infinity maybe?

From visionary film maker Spike Lee comes the incredible true story of an American hero. It is the early 1970s, and Ron Stallworth (John David Washington) is the first African-American detective to serve in the Colorado Springs Police Department. Determined to make a name for himself, Stallworth bravely sets out on a dangerous mission: infiltrate and expose the Ku Klux Klan. The young detective soon recruits a more seasoned colleague, Flip ... more...