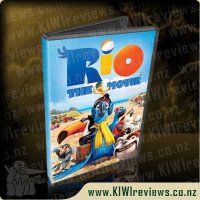 But it's far from love at first sight between the domesticated and flight-challenged Blu and the fiercely independent, high-flying female, Jewel. Unexpectedly thrown together, they embark on an adventure of a lifetime, where they learn about friendship, love, courage, and being open to life's many wonders.

My kids watched this and loved it so I thought it would be good to watch together. This is going to be a favourite family movie in this house.

It started off rather funny and just got funnier. The animation is great, the birds look so real and there are some funny scenes and some that leave you with a funny feeling, one of wonder. I like a movie that has a story and can make me think or laugh or even better both. I did feel sorry for the birds I mean you don't just throw them together and hope for the best.

One has to wonder what would happen when wild animals are domesticated and treated like family instead of the animals that they are. Blu is treated more like a person than a bird so it is not a surprise that he is a bird that has no idea how to fly and watching what he goes through until he learns what it takes to fly is rather amusing.

One of the nasty birds in the movie made the story more believable but still I can't feel sorry for Nigel as he is just plain nasty. Glad that the bad people didn't get what they wanted.

I will be keeping an eye open for the next movie as I know the kids will be asking to watch it.

I saw Rio over a year ago, borrowing it on DVD and had vague memories of the kids really enjoying it, so I recorded it when it came out on TV last weekend.

Rio starts off right away with a knock to heart, young Blu has yet to even learn how to fly when he falls to the ground and is snapped up by smugglers, shipped half way across the world he is found by Linda and they form a strong bond. One day they fly to Rio in an attempt to have Blu fall in love with the only other Blue Maccaw known of, though of course the road is rocky and smugglers still play a huge part of the story. The voice actors are well suited to the movie and I feel that they all did a good job, considering I only remembered one character/actor when I was watching it.

I loved the music, give me a good movie with great music and I am generally drawn in and hooked, though I didn't really like Will.i.am's song, but you can't win them all, the rest of the music was a hit and I could even see my mum tapping her foot to the beat. There was a good range of jokes for all ages and everyone in the room seemed to be loving it, with my five year old wanting to watch it again right away.

Rio is a great feel good family movie. It has been my son's favourite movie for well over a year now which is unusual considering he's usually drawn to movies with lots of action/fighting, zombies and other crazy monsters. I think the main draw for him is the music - it's catchy and upbeat and he can often be found having a dance party in the lounge while he watches.

Rio is ultimately a sweet story full of adventure and romance. Blu is quirky and provides a lot of laugh out loud moments as do some of the other characters. My son definitely finds a lot to laugh about while he watches this movie and the jokes never get old.There is a darker undercurrent to it all with the bird smuggling but it's all very well balanced so it's not scary in any way. I thought that the voice actors suited their roles well and the animation was also really well done.

Rio 2 has just recently been on at the movies but we're waiting for it to come out on DVD before we watch it and hopefully it will be more of the same - a great feel good movie that the whole family can enjoy.

One thing I find with American animation movies is they don't always get the right speakers for the roles. They seem to cast whoever is 'hot' at the time and just throw them in willy nilly. At the time the movie was made Jesse Esienberg was hot property because of Zombieland and The Social Network. I don't think his voice is well suited for Blu a Rare nerdy Macaw brought up by Linda a strange lady completely obsessed with her bird. But, in saying that it doesn't stop the movie from being enjoyable. Once you adjust to listening to his high pitched squeaky boys voice the movie is fantastic. So colourful, bright with some zany creatures including New Zealand's own Jermaine Clement.

This is a great family movie about bird smugglers, relationships and love. I personally own canaries and love birds so this movie was right up my ally. It stars Will I Am and Jamie Fox singing love songs, Jermaine being evil and the very funny George Lopez. Children and parents of all ages will enjoy the movie. It is funny enough to keep you chuckling along.

I love the awkward love scenes between both the humans and then watching that same awkwardness between the birds its so cute. The festival looks so inviting and now my daughter wants to go to Rio De Janeiro to join in the big party and wants to go hang gliding.

Part two is in production at the moment and I am sure it will be as enjoyable as this one. Recommend for a great family movie night.

The Boxtrolls, a community of quirky, mischievous creatures, have lovingly raised an orphaned human boy named Eggs in the amazing cavernous home they've built beneath the streets of Cheesebridge. When the town's villain, Archibald Snatcher, comes up with a plot to get rid of the Boxtrolls, Eggs decides to venture above ground, "into the light," where he meets and teams up with fabulously feisty Winnifred. Together, they devise a daring plan to save Eggs' family. Based on the children's novel 'Here Be Monsters' by Alan Snow.