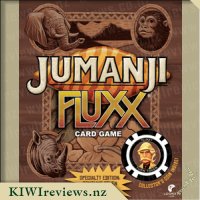 Fluxx is a card game in which the cards themselves determine the current rules of the game. By playing cards, you change numerous aspects of the game: how to draw cards, how to play cards, and even how to win.

At the start of the game, each player holds three cards and on a turn a player draws one card, then plays one card. By playing cards, you can put new rules into play that change numerous aspects of the game: how many cards to draw or play, how many cards you can hold in hand or keep on the table in front of you, and (most importantly) how to win the game.


Jumanji Fluxx features the gameplay of Fluxx and characters and events from the Jumanji film.

Jumanji is a film I have loved since it came out in 1995, it is one I have rewatched countless times and I watched the two sequels when they both came out. When I saw this game come out I knew I wanted to get a copy, having already enjoyed the Doctor Who version of Fluxx. Unfortunately a lot of other people thought the same thing and I had to wait for the second batch to go on sale before I could get a copy. This follows the same basic gameplay as all the other Fluxx games, you start off drawing one card and playing one card and this can change along the way, along with other new rules being thrown in. When it comes to the illustrations you have a mix of characters, items and creatures from both the 1995 film and its predecessor, Welcome to the Jungle.

Jumanji Fluxx brings in some new features that I hadn't come across in other editions. There are cards which, when played, eliminate any player who has a keeper matching the image or description on the played Danger card. However, so long as there are two people playing, eliminated players can rejoin the game at any point, or even if someone new comes along and wants to join in, they can (this gives a video game aspect as seen in Welcome to the Jungle). There are a couple of Meta rules which introduce permanent rules to the game such as having to yell 'Jumanji' when you win. The game also comes with a nifty player coin, which doesn't have any real use until a certain rule comes into play, but it is a nice little touch to the game. The box is also more sturdy than other variations but is also a lot bigger so it looks a little out of place next to the rest.

I really enjoy this version of Fluxx, it adds some great new gameplay to the game and is perfect for a Jumanji fan.

•  Warriors from across all of time have been collected and brought to you.
•  More than just a strategy game, embark on a build and battle fantasy adventure like no other. You build the environment, making every encounter unique.
•  Then select your team. From futuristic spies to the cunning of a samurai warrior, you choose the best ... more...