ProdID: 6513 - Keeper of the Crystals 1: Eve and the Runaway Unicorn
Author: Jess Black 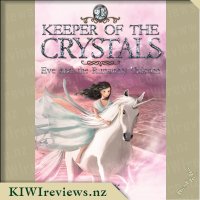 Keeper of the Crystals 1: Eve and the Runaway Unicorn product reviews

Keeper of the Crystals is an adventure fantasy series full of secrets and mystery. Eve and Oscar, two unlikely friends, accidentally tap into the power of crystals. They are thrust into different and dangerous worlds where unicorns, tigers, dragons and panthers communicate with people and where native communities and their way of life are under threat.What are the secrets of the crystal keeper and why does Eve have these powers?

Eve is staying with her grandmother and her only choice in playmate is Oscar, the boy from next door. The lure of the forbidden attic in her Nan's house proves too much for Eve and Oscar and they sneak upstairs to explore. When Eve finds a small crystal figurine of a unicorn it acts as a portal into another world. Eve and Oscar find themselves in the desert of Panthor where unicorns are now enslaved, land turned to desert and people forced to become desert nomads.

How can Eve and Oscar survive in a land where panthers and people communicate and where an evil king has complete control of every living being? More importantly, how will they ever get home again?

The cover of this book sings to young girls as the title sparkles, and it has added diamonds over the cover. It's a soft pink with a unicorn on the cover, guaranteed to capture the attention of girls. The story begins with Eve, she has been 'abandoned' by her parents, they dared to go on a cruise and leave her with her BORING Gran, - she was lovely but Eve couldn't believe her parents had left her behind! Eve is great at creating some wonderful games, but they are girly and her poor friend will only stand for so much girly play before he abandons the game and leaves Eve to her own devices.

As children are apt to do when they are left to their own devices they began to explore, and so the adventure begins... an exploration of the attic reveals treasure, a tiny crystal unicorn, light bounced off the crystal and then the room was filled with bright white light...

The story is well written, the book itself is deceptive, the cover hints at young readers, and the text inside is large print, emphasising this story is for children 7 - 8 yet there were some very complex words within the story, obscured, luminous, compressed, nomads, penance to name a few. I think for young children this would be a read together book, or they will lose the story as they work on decoding the complex language.

This is a book that will be enjoyed by the reader as long as they are supported by an adult with some of the language, the writing itself is descripted with some rich imagery within the sentences. I'm not sure if young children will revisit this because of the language, I think it would be reread as once they have the gist of the story line in their head they could 'fill in the gaps' with any words they didn't understand.

I think the "Keeper of the Crystals - Eve and the runaway unicorn" is a good choice to add some enrichment to young girls reading shelves. I think the storyline is a good mix of magic, friendship, courage and a little bit of heroic's. It's exciting that this is the first book in a series, my girls already asking if 'we' can read Eve's next adventure.

Having just finished another book that had unicorns in it, I grabbed this book to review. In the past I would have avoided it, because of the pink sparkly cover art. My eldest daughter is resistant to princess-like pinkness. But the moment I showed her the book in my wee pile of other books, she asked all about it. It was clearly the most interesting of the lot. Her key interest being the unicorn.

We sat down to start reading this, 2 chapters at a time on Saturday night. The first two chapters went very fast. She was intrigued by what might happen next and wanted to stay up longer to wonder about it with me. She was a little disappointed that there weren't a lot of pictures. She really wanted to see a picture of the mark on Eve's hand. I explained that she needed to use her imagination, and she was satisfied with that.

In the end, we decided to stay up a bit later tonight to finish the book. It was all a bit too exciting to stop where we got to after our 2 chapters, so we plodded on. There were riddles and mysteries to be solved, which gave us lots of fun trying to work them out together. Some of them I could figure out, but some I needed the characters to clue me in. It didn't matter too much if you didn't know, it just made for some fun guessing.

We loved this book, and it looks like there is much more to come. I can't wait to check out the next adventure for Eve. What I liked the best about the book was, that Eve is a strong female character. She has some quite human responses to scary situations, but she digs deep. She is able to use her power to make a real difference, and I love that she is so heroic. While it is probably aimed at girls, there is a male character in the book as well. He is secondary but just as brave and smart as Eve. I like that they can work together so well, but there is no hint of romance.

Will you survive or will you die? You are swimming through the ocean, trying to escape dangerous mercenaries who have planted a bomb on the mainland. Behind you, getting closer, is the largest shark you've ever seen. An explosion rips out from the shoreline and a massive wave flings you closer to the stunned shark's open mouth. You don't have much time, and you need to get to land. Do you keep swimming or do you climb onto the ... more...