« Out in the Moana review 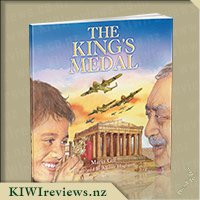 Disclosure StatementFULL DISCLOSURE: A number of units of this product have, at some time, been supplied to KIWIreviews by Upstart Press or their agents for the purposes of unbiased, independent reviews. No fee was accepted by KIWIreviews or the reviewers themselves - these are genuine, unpaid consumer reviews.
Available:
November 2021
Samples for Review:

Poppa reveals a war medal in his hand to his grandson. Manu asks, "Did you win it?"

"Sort of, a King gave it to me," the old man says. He then tells Manu how his Anzac platoon rescued the Greek King, Prime Minister, and the rest of their party on a Greek Island during World War II.

It's a perilous journey trekking from one side of the island to the other, trudging up a ravine, across the White Mountains, and through a narrow gorge. They must avoid the German paratroopers landing in their thousands on the island and renegade Crete mountaineers who shoot at them, mistaking them for Germans.

Due to the kindness of the village people and the dedication of the Anzac soldiers, they make it to the coast and send out SOS signals. But they don't know if the ship is friend or foe.

Manu discovers a tale of bravery, teamwork and sacrifice and sees his grandfather in a new light.

Illustrations are by Alistair Hughes.

It is hard to define an audience for a book like this. Although it is suitable for children aged eight and over, Mr 12 and his 18-year-old cousin had to be persuaded to take turns because they both wanted to read it at the same time. Miss Nine, who had already read it, had assured them that they would both find it intriguing. And then it was the turn of the adults. My uncle was a soldier who survived being stranded on Crete during the second World War so his daughter, my cousin, was just as fascinated with the story as the younger ones had been. Truly a story for the whole family.

I think what appealed to us most was the amazing artwork. Not actual photographs, but near enough to the real thing that as readers we could almost picture ourselves there. The colours, the dry rocky landscape, the skies full of parachutes, the aircraft high in the daytime sky above the Parthenon and the night sky above the sea - all contributed to the impression of being there and taking part in the adventure. Mr 12, who is well and truly into war simulation games online, was especially interested in the king's rescue; like Manu, he was keen to learn more.

The last pages of the book are dedicated to the historical facts which inspired the story. This was a section that Miss Nine had skipped, but which the boys (and my cousin) found compulsive reading. After all three had read the book they spent an evening outside by the campfire, discussing their own family stories. Although my uncle's experiences were slightly different, he too had been assisted by the people in a small village and kept hidden until the war was over. He never forgot their kindness, and on his return to New Zealand he renewed contact with the family that had sheltered him. He remained close to them right up to the time of his death, and travelled back to Crete several times to renew the friendship. Little extras like that really bring a book like this to life and ensure it will be treasured by his extended family, I have a feeling that the book will remain on my cousin's bookshelf in Whangamata so it can be shared with other family when they visit.

One final aspect of the book that Mr 18 and I appreciated was the page on different medals. The artwork shows the intricacies of the designs, and below are listed the names of the members of 12 Platoon who received them for their services as bodyguards. The medals underline the human element of warfare - that it is not just about destruction and killing, but also about bonding and caring for comrades, and for recognising just what they have done. War brings out the best as well as the worst in people as Manu learned.

Two people fall in love, not yet knowing where they have come from or where they are going. Kevern doesn't know why his father always drew two fingers across his lips when he said a world starting with a J. It wasn't then, and isn't now, the ... more...