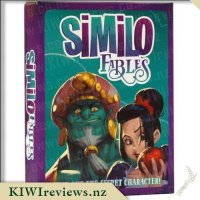 Similo is a cooperative deduction game. Each version comes with a deck of 30 cards, beautifully illustrated by Naïade, showing the portrait and the name of a series of characters with a common theme, like fables.

Your goal is to make the other players guess 1 Secret Character (out of the 12 characters on display in the middle of the table) by playing other character cards from your hand as Clues, claiming if they are similar or different from the Secret Character.

After each turn, the other players must remove 1 or more characters from the table, until only the right one remains, and you win... or it is removed, and you lose!

I was browsing the a board game website when I came across this game, they had a couple of different versions at the time and I opted to go with Fables as I've always been a fan of fairytales and the like. Opening it up I was delighted with the artwork on these cards, Each card is a nice, large, size which makes it easy to see on the table. Each card also gives you the name of the character being depicted and when they were first found in literature (which I thought was a really nice touch and adds a little education to the game, if you are so inclined to know when these stories originated), as well as who is credited with creating the characters. You need to pick one person to give you the clues and the rest need to gather around so they can discuss who the clues could be pointing to.

The first couple of games can be a little confusing as you try to remember what the orientation of the clue card means. Put vertically and it means that the card the clue giver has placed down matches the card you are trying to be left with, in some way. This could be blatantly obvious like they're both female or it could be that they both are wearing green, have facial hair, blue background, same story etc... Placed horizontally it means that the clue card s different to the end card and again, this could be anything. You start off by eliminating one card, then two etc. Until you are left with just one card left (unless you screwed up and accidentally eliminated your goal card, in which case you all lose).

This isn't a much loved game in our house, we have a game with similar mechanics which we far prefer, but this is fun at times and should we ever get sick of it, I love the illustrations enough to make some kind of wall art with it.

Sackboy is back - and he's brought along new friends!

PlayStation's most imaginative franchise, LittleBigPlanet, is back with a new cast of playable plush characters in the biggest handcrafted adventure yet!

All the new characters are, like Sackboy, fully customizable and there will be plenty of quirky new costumes ... more...