ProdID: 1275 - CSI: The Board Game - Encore Edition
Developed by Specialty Board Games Inc 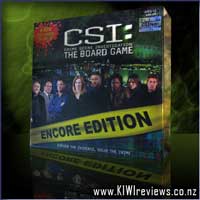 Disclosure StatementFULL DISCLOSURE: A number of units of this product have, at some time, been supplied to KIWIreviews by the company for the purposes of unbiased, independent reviews. No fee was accepted by KIWIreviews or the reviewers themselves - these are genuine, unpaid consumer reviews.
Available:
at selected games retailers

Experience how it feels to be an actual crime scene investigator

Players: 2 to 4
Ages: 13 & Up
Object: To be the first player to enter Grissom's Office with a correct Arrest Warrant proving Means, Motive and Opportunity.
CSI:Crime Scene Investigation ™ Encore Edition enables players to gather evidence and formulate theories, just as they do on the #1 TV show. Investigators race to collect three levels of evidence from all seven Crime Lab Divisions: Interrogation, Autopsy, Identification, Trace, Ballistics, Forensics, and DNA.

Interactive and exciting game play keeps players on their toes as they combine cutting edge scientific methods and old-fashioned police work to solve the crime.

I had absolutely no idea what to expect and boy was I in for a shock. This is a very involved game that does require a bit of thought and not to mention a bit of planning, oh and some lucky dice rolls to land exactly on the square you want, I also highly recommend reading the instructions fully before playing this game as it will make it play a wee bit faster. This is quite an involved game and could quite easily take 2-3 hours to play, but it is also a very fun game, especially if you are a fan of games like Cluedo, and being a CSI fan is not a requirement to play or enjoy this game, but it does help make it more enjoyable, especially when you can picture the case unraveling before your eyes as if you were watching the TV show.

The game consists of 8 cases so it is good for at least 8 games where you don't know who the guilty party is, however that doesn't mean to say that after 8 games you put it on trademe, as there is still the challenge of collecting all the evidence and beating your fellow players to Grissoms office for the win.

I hope that the fine fellows at Specialty Board Games release some other game card packs as this would help extend the life if this no end. Of course if you are an imaginative kind of guy then you could always make up your own cases and case cards to play with.

Not being a real fan of the show (although I do watch it occasionally), I approached this game with some trepidation. Firstly on the advise of my opponent I sat down and read through the instructions, in fact I read them twice just to make sure I had a handle on the game, which after a few minutes playing felt a bit like I was back playing Cluedo with the family on a wet Sunday afternoon (which is a bit of a worry I can tell you.) I also felt the game was a bit complex in places and the locations of some things on the board could have been better if they were scattered at bit more randomly, that aside however I did enjoy myself playing this game (I mean I did win after all

I do think however that after you have played all 8 games it might get a bit boring as you will already know the solutions unlike Cluedo which introduces that random element into it. But if more case card packs were introduced say once every 2-3 months this would make this ultimately a very longterm playable game.

Beginning as either Kung Lao or Liu Kang (each possessing his own unique repertoire of attack styles and ... more...