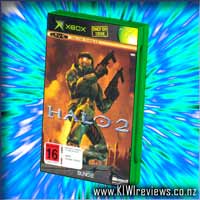 Disclosure StatementFULL DISCLOSURE: A number of units of this product have, at some time, been supplied to KIWIreviews by the company for the purposes of unbiased, independent reviews. No fee was accepted by KIWIreviews or the reviewers themselves - these are genuine, unpaid consumer reviews.
Available:
9th November 2004

Features
- The epic story continues: Following the demise of the Covenant at Halo, the Master Chief must defy the Covenant march once more as they fast approach earth's perimeter. Failure is not an option.
- Mind blowing graphics: A new graphics engine brings the Halo universe to life - dynamic lighting and shadows, sprawling rendered environments and obsessive attention to detail make this game nothing short of spectacular.
- Powerful new weapons: The Master Chief's arsenal gets some serious new additions, many of which have been pried from the twitching claws of defeated enemies.
- More driveable vehicles: Even more ways to speed into battle or explore the game's vast landscapes.
- Multiplayer on Xbox Live: Imagine the ultimate Halo experience - battles between human and Covenant forces, frenzied vehicle and infantry engagements, squad-oriented operations, real-time voice communication - and you're getting close to picturing the multiplayer revolution on Xbox Live.

How can you improve Halo? Ensure that Master Chief and Cortana remain in it, add more guns, and add more vehicles. The entire way that gunplay works has been reworked. With the ability to hold two guns at one time (only the small handheld guns obviously) you get twice the firepower. Although great fun, it does get confusing having to monitor ammo levels in both guns, especially if you have two different guns, with different clip sizes, or fire rates.

Another improvement, in-line with the vehicle additions, is the ability to commandeer enemy vehicles that are in use! Have you ever jumped off a ledge onto a flying vehicle and forced your enemy out to fall to their deaths? It's difficult to do, but hilarious to watch.

But is it just kicking alien arse? No you get to play as the Covenant as well. This game has everything! The dual story line that links the two races together is well written, and helps you to see the Covenant as more than just some alien race that needs to be destroyed. You gain a better understanding of Halo's, and the Halo Universe, through this game. Much more exciting than the original.

Yes I like most people in the world absolutely loved the first game, but now it's successor is here I have found what has to be my favourite X-Box game of all time.

This one just takes the X-Box to new levels of gameplaying excellence.

One twist which I loved was the dual storyline (I'll leave it at that and let you discover this one for yourself) this just opens the game up to a whole new level.

The ability to dual wield weapons is a great improvement especially when you can have some really great combo's like an energysword for some close up melee combat and a Covenant pulse rifle for the further away attacks. Although getting used to this can take some time when each weapon can be fired/used independantly of the other.

It is a game like this which firmly cements XBox as the premier gaming console.

The best thing to hit the Xbox in it's entire history. This game is what the console was made for.

I found it took me a while to get back into the 'flow' of playing Halo... but then I am not that much of a game player... too many interesting things to explore to get stuck into games for months at a time.

After a warmup play around the first few checkpoints, I found it a whole lot of fun to be blasting around. Warning, once the sound goes funny, do NOT assume a clear floor still has a forcefield... hard vacuum orbital space may be big, but it doesn't leave you room change your mind.

My personal fave weapon, simply because I would adore playing with it were it real, is the Covenant Energy Sword... -drool- what a cool thing to carry into a melee battle. I also found myself quite impressed with the degree of 'science' behind the armaments, a very high degree of realism.

'Easy' is still easy, but the gaps between play-levels is greater on this version, so by the time you get up to 'Legendary' you are really sweating for your progress...

Overall... a superb game, full of interesting new ideas for gameplay, such as dual-wierd... the ability to swap your ability to throw grenades for the ability to hold and fire a second hand-held weapon, such as the M7/Caseless Sub Machine Gun or Covenant Needler. A VERY useful addition. A stunning game that has a twisty tail... watch out. :)

The global game of strategy and skill

Imagine... a utopian global village, with 32 building structures from around the world.
In the game of Cathedral World, the Great Wall of China, the West Wailing Wall, the Wall of Marrakech and the Zimbabwe Ruins define the space where two opposing players vie for territory in ... more...