ProdID: 250 - The Curious Incident of the Dog in the Night-time
Author: Mark Haddon 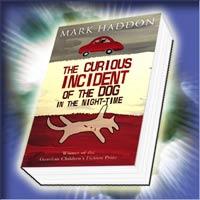 Disclosure StatementFULL DISCLOSURE: A number of units of this product have, at some time, been supplied to KIWIreviews by Penguin Random House or their agents for the purposes of unbiased, independent reviews. No fee was accepted by KIWIreviews or the reviewers themselves - these are genuine, unpaid consumer reviews.
Available:
April 2004

*WINNER OF THE WHITBREAD BOOK OF THE YEAR*

Fifteen-year-old Christopher has a photographic memory. He has Aspergers Syndrome, a form of Autism. He understands maths. He understands science. What he can't understand are other human beings. When he finds his neighbour's dog, Wellington, lying dead on a neighbour's lawn, he decides to track down the killer and write a murder mystery-novel about it. In doing so, however, he uncovers other mysteries that threaten to bring his whole world crashing down around him.

Christopher Boone is not like any other teenager, he is unlike most adults, yet at 15, he is straddled between childhood and adulthood and does not understand either; he is neither a child, nor is he an adult. Christopher has Asperger's Syndrome, which keeps Christopher in his own private and very ordered world - of reds and yellows, maths and logic and his father.
Mark Haddon breathes life into the character and has an intimate understanding into the workings of a child with Asperger's, having worked with autistic spectrum disorders in his early adult life. He has created, no, given birth to a wonderfully complex person, and knows well his likes and dislikes, so much so, it is almost biographical, and I would like to see Christopher in further outings, his trip to university for example.
Myself, having Asperger's (but not to the same degree as Christopher) can draw on many parallels between my life and that of Christopher: the frustration of crowded places, not wanting to be touched, taking things too literally, missing the point of whole conversations and so on. This story is as much about Asperger's as it is a novel, and should be read by anyone who is dealing with an Asperger's child, as much as I will be giving this book to potential partners for them to find out what problems they could encounter when dealing with me.
This book is an addictive read, it will fill you with tears and laughter and Christopher Boone, I am sure, will join the ranks of other famous literary characters and live on, perpetually, in his own right, much like Sherlock Holmes, Christopher's favourite fictional character.

I really enjoyed this book, both for its plot and for the fascinating peek and insight inside fifteen year old detective, narrator Christopher's daily life as a person with Asperger's Syndrome. It is a quite unique book, very easy to read, and quite compelling too.

I was very intrigued by how his mind worked: numbering the chapters with prime numbers, noticing patterns, having rituals, being able to detail each and every marking on each individual cow in a field when asked later, as compared to someone who would simply remember seeing, well, "cows".

The last example about cows was told to illustrate why going to new places was very tiring for him, because his mind takes in every little detail, unlike someone else who will just glance, and unlike revisting familiar places where he just needs to take in all new or latered things. This is just one way in which life can be difficult for him. He also has trouble understanding emotions, which becomes especially ironic later in the book when he uncovers some quite emotional secrets.

Every now and then a book comes along that make you look at the world in a totally different way. This is one of those books. With official reports of Autism on the rise these days, this book brings a well-needed spotlight to a condition we still know next to nothing about.

Asperger's Syndrome could be considered a form of Autism that can cause the sufferer to fail to take into account that other people have minds too. (This definition is still under debate within the medical circles, however it is the definition that most closly matches the symptoms of a sufferer I know.) They perceive other people in the same way as a table or car, as a piece of machinery or inanimate object, and so when the person does something unexpected or sudden, it throws the sufferer into confusion and triggers 'compensation' such as screaming, introverted behaviour, or semi-vegetative states until things return to 'normal' in their worldview.

This book shows you the world through the eyes of Christopher Boone, diagnosed with Asperger's, as he tries to solve a murder mystery. He has found Wellington, one of the neighbourhood dogs, dead with a garden fork stuck in him. This starts a chain of events that takes Christopher on a journey of discovery, full of terror, trials and encounters with the things he doesn't like... the colours yellow and brown, enclosed spaces and strangers.

Despite the simplistic nature of the story, it was highly appropriate to the character, full of the sorts of quirks that someone with Asperger's would include, such as numbering the chapters with Prime numbers instead of sequential integers, explainations of why he used certain phrases, etc.

Overall, I was highly impressed with this book. It gave me an insight into the mind of someone I would most likely never know in my day to day life. I can only wonder at the enviable skills of a writer who can put themselves into such a place and not get lost in it.