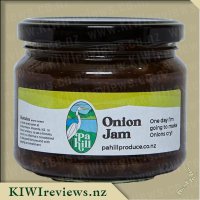 The perfect blend of caramelised onion, balsamic vinegar and spices.

All our Chutneys and Sauces contain whole fruits, malt vinegar and less sugars per serving. The fruit we use is grown only in NZ and all our ingredients are from NZ suppliers. Pa Hill's products are created from recipes dated back 1910. All produce being handmade and our methods are "Back to Basics". 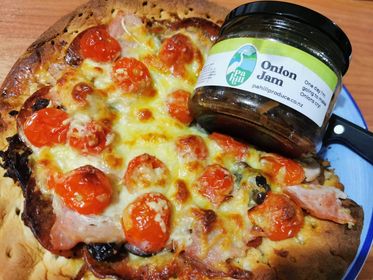 This product is unlike any other onion jam I have tasted. It is more like an onion version of sauerkraut, if that is possible! On opening the jar, I was greeted by what appeared to be a jar of onions and nothing else. Only the wonderful spicy pickle smell confirmed that it was indeed a preserve. I tasted some and it was just like eating a pickled onion except that the onions were sliced and had a shiny coating. Delicious and very moreish.

I could think of many different ways to use the jam, so we started with a pizza. Pickled onions always go so well with cheese so this was an obvious choice. We spread the jam on the base then built it up with a selection of salami, bacon, mushroom, and tomatoes. The topping consisted of mozzarella, parmesan, and a sprinkle of paprika. When it emerged from the oven, we could smell the onions above everything else. It was so appetising that we ate the whole pizza between us.

Tasting the onions on the pizza made me think about sausage sizzles - the sort you get outside supermarkets when people fundraising for a charity or a sports trip give you a cheap burned sausage on even cheaper white bread and you buy it because you want to support them. The saving grace with those sausages is the fried onion that usually accompanies them, and which makes the whole thing edible. I made our own version of the sausage sizzle for lunch, but I used decent sausages and wholegrain bread, and added a dollop of onion jam on top. So good, and a far cry from the fundraiser sausage. Mine actually had flavour!

The third way we tried the onion jam was on a ciabatta roll with pastrami and sliced tomatoes. I really enjoyed that: it was flavoursome, and although I had technically eaten enough after one, I was greedy and ate a second because it was so nice. It is a pity that this jam is relatively expensive because I can think of so many other ways I could use it, but my jar is already empty alas.

And the positive? Apart from the wonderful taste and appearance of the product, I was impressed by the slogan "One day I'm going to make Onions cry!" on the jar. That says it all. We have all had the experience of having our eyes water when we chop up onions, and when travelling I tend to avoid them as whole onions can be messy and even smelly. Having the product in a jar, however, is perfect for when you are using someone else's kitchen or preparing a meal in a motel. It is clean, quick, and so versatile. Ideal for that road trip!

Breakfast is no longer a struggle with Kellogg's Sultana Bran Buds cereal.

It is Very High In Fibre and tastes GREAT!

In fact one 45g serve contains 20% of the recommended daily intake of fibre, making it a great breakfast choice because fibre can help keep you full between meals.

With Buds light crispy shell and a fine layer of tasty sultana, your kids won't want to wait until breakfast for their ... more...