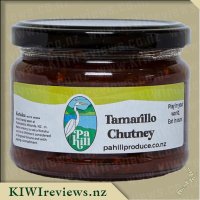 Disclosure StatementFULL DISCLOSURE: A number of units of this product have, at some time, been supplied to KIWIreviews by Pa Hill Produce or their agents for the purposes of unbiased, independent reviews. No fee was accepted by KIWIreviews or the reviewers themselves - these are genuine, unpaid consumer reviews.
Available:
via online shop

All our Chutneys and Sauces contain whole fruits, vinegar and less sugars per serving. The fruit we use is grown only in NZ and all our ingredients are from NZ suppliers. Pa Hill's products are created from recipes dated back to 1910. All produce is handmade and our methods are "Back to Basics".

I purchased this to remind myself why "quality counts" as I have tried some jam and chutney previously - the onion jam is a total recommendation from me. I also found their apricot jam a good classic jam. These products "stick to their knitting" and don't add a lot more than the core ingredients which works for me but does mean you have to add spice/herbs a bit more yourself.

So this product took a moment or two to open which was a bit of a surprise as I had no issue with previous jars and it was recently bought. The smell was strong but not overpowering. I enjoyed the rich dark colour which felt good and strong. There didn't seem to be too many massive chunks and it wasn't all smooth either - a nice mix. So the look and impression was great and made me think I would like to gift this to others as it seemed a "treat" type product. I like the reusable jars which work well for takeaway breakfasts in our house.

Taste was fabulous. There are not a lot of tamarillo products either available nearby me or to compare to this. I had to explain what a tamarillo was to British husband but after that slow start he was keen and added it to toasted sandwiches, crackers, and even tried it in a Mexican dish which was a hit. Others asked what it was that I added and were fascinated that a tamarillo chutney exists outside private bottling for friends. I totally loved the lack of too many flavours to overpower the fruit/veg taste.

I find the Pa Hill products very good quality and although they are a little pricey it is clear what you are paying for is a versatile taste. Will be buying more for sure.

I'm a Tamarillo fan from way back, but finding products that include this totally under-rated fruit is extremely hard, so when I saw this I was rather excited. I have to admit though, that like the others, I struggled to open the jar and I was frustrated as I had just baked some fresh zucchini bread and I thought the pairing would work really well.

Home time...and in walks the hubby home from work. My savior... he opened the jar for me and instantly the smell hit me. To me though, it was more of a balsamic time smell (another of my favourite things). First impression was that it was a nice chunky chutney, more like the ones your Grandma used to make. Luckily I had saved some of the bread I had made so it was time to test the flavour combination. The chutney itself packed a heap of flavour, and again, reminded me of balsamic, but thats a good thing. The tastebuds were hit with a huge flavour burst and despite having that balsamic flavour, it was also extremely smooth tasting. It matched amazingly well with my bread, and I have visions of it appearing on our next cheese board.

It would go really well in any mince meal but I think it would almost be a shame to hide it when it's so tasty on its own merits. I would definitely recommend this to people but its not something my budget would stretch to on a regular basis, but as a special treat... HELL YES!! 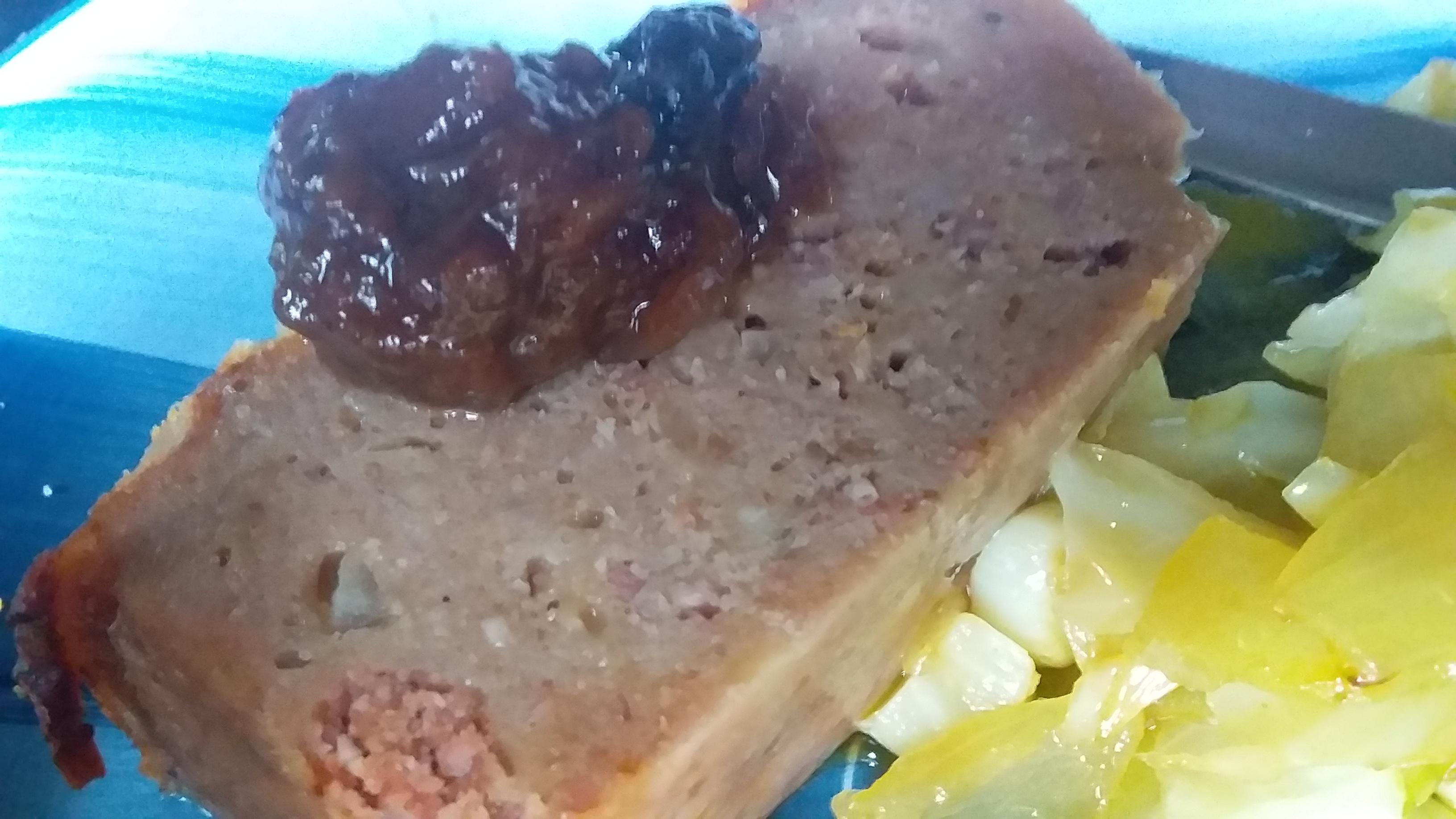 I was naughty and came home with a sausage roll for lunch the other day and I thought I would use this instead of the trusty tomato sauce - but try as I might I could not open the lid. I smacked the base of it, I used a knife to jammy under the lid, I used all of my strength - but, nothing I tried would work. So I put it back in the pantry and went with plan B instead.

We had left over meat loaf for dinner and after getting my husband to show off his might, I finally got to try this on a meal. Taking a sniff of the contents it smelt like a smokey tomato sauce which rather surprised me. I took a little try and it was sweeter than what I expected. I added it to the dinner but was met with mixed reviews. I myself, was not a huge fan and neither was my eldest. My husband thought it was fantastic where as my youngest was just rather bla about the whole thing. Don't love nor hate it but wasn't sure she would want again.

I thought I had better try again with a different base and while watching tv made a plate of cheese and crackers for my husband and I to enjoy. I am glad that I only put small dozes on a couple of them as the taste just was not winning for me. I looked at the ingredients and they seem pleasant enough - I am guessing I just don't like the dried fruits maybe. It is puzzling. But, where as apparently it was my loss my husband enjoyed the rest of the cheese and crackers without hesitation.

Unfortunately, once the jar is finished I can not seeing us buying ever again. Which, after looking at the price is probably not a bad thing. In my eyes this is a tad expensive for what it is. Not sure if it is on par with other chuntneys but not something I would be willing to pay. 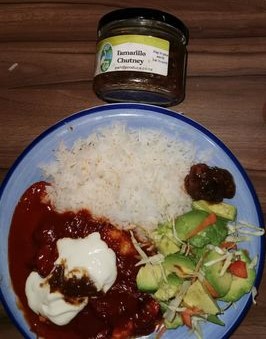 Tamarillos are one of my favourite fruit because they are so versatile. They can be eaten fresh or cooked, and a slice of ripe tamarillo is especially delicious with cold meat or a hot roast turkey dinner. However, I had never tried them in a pickle or chutney so was looking forward to tasting them in this product. My partner does not like tamarillos at all but I insisted that we both had to try the chutney as it would almost certainly be quite different prepared this way.

We often have home-made curries and similar spicy dishes, and our go-to accompaniments are some variety of chutney (plus a dollop of yoghurt if they are very hot). I had planned a meal of spiced venison and chickpeas, and had slightly overdone the chilli: it was hot even by our standards! So out came the Greek yoghurt, and it seemed the ideal time to try the tamarillo chutney as well. I deliberately concealed the label so I would get an unbiased opinion, adding the chutney with rice and fresh salad before putting the plates on the table.

When I had first opened the jar, I had sniffed the contents, noting that they smelled not unlike a rich tomato sauce. I then tasted a little on a spoon and the impression was still that of a sweet, spicy tomato. I am aware that in the old days the tamarillo was referred to as a tree tomato, and now I know why. It is not just the appearance that resembles that of a Roma tomato; it is the flavour as well. I was really interested now to see what my partner would make of it.

To say the curry was delicious would be an understatement. The chutney went so well with it that I think this will be my preferred accompaniment for curries in future. The sweetness of the chutney, with its acidic and slightly peppery aftertaste, blended with the venison pieces to create a totally perfect combination. We finished our meal in record time and went back for seconds. This time I said nothing, just put the second helping on the table and the chutney jar beside it with the label showing. The reaction was priceless: disbelief, then an enthusiastic attack on the jar. Tamarillos are no longer persona non grata in our house.

Now that we are on the same page, I can see myself using this product to complement many dishes. Basically, it would work with any meal where a sophisticated version of common tomato sauce could be used. Sausages (including sausage sizzles), cold cuts, as a pizza topping... and there are hundreds of other possibilities. And even though the price is quite high, I think it is worth paying a little more to get a product as versatile as this.

Incidentally, I was so intrigued by the flavour that I later googled it, and yes, the tamarillo is a distant relative of the tomato. I had never noticed the similarity when eating the fresh fruit, but in the chutney that flavour was unmistakeable.

This Jolokia Rum Voodoo Really is a superbly balanced sauce with heat and plenty of flavour! It goes well on everything!