The Chronicles of Aden Weaver - 1 - Or'in of Tane review 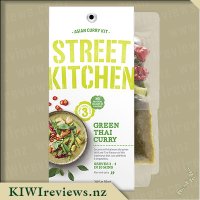 Disclosure StatementFULL DISCLOSURE: A number of units of this product have, at some time, been supplied to KIWIreviews by Passage Foods or their agents for the purposes of unbiased, independent reviews. No fee was accepted by KIWIreviews or the reviewers themselves - these are genuine, unpaid consumer reviews.
Available:
at supermarkets nationwide

At its essence is a zesty blend of green herbs and spices, when added to coconut milk delivers silky notes of delicate sweet heat. Toss through your choice of crunchy greens and chicken until cooked, but only to perfection. Is it ready yet? Almost!

Serve over steaming fragrant rice and top with wedges of lime and Thai herbs. So whether eaten at one of the eclectic stalls sprinkled across the night streets of Thailand or delivered in ornate bowls to an exotic and private setting, this meal will have you only wanting more. When you find yourself reminiscing, take our Thai Green Curry and make it your own.

It's all in the production; we only suggest that you cook with joy!

I love thai good but I stuggle to make a decent thai curry so I rely on products on the market to help me help. I love this packet design I've never seen anything like it but it's simple and easy to see what it is. Both sides of the packet tell you what it is and has the ingredients and instructions right there. The packet contains all the spices, paste and coconut milk all separate and nice sizes.

The instructions are easy to follow on what order to open and use the packets, just make sure your rice is already on. The packets are easy to open. The first with spices to cook them off smelt so good, the second was the paste which I only used half of as I could smell the heat already and I have members of the family that would stuggle. Added everything that we needed chicken and veges then coconut milk, the aroma that came out of the kitchen I thought was amazing you could smell the spices and knew this was going to be great.

Once I dished up my mild eaters I added the rest of the paste for the rest of us. For a family of 6 eaters there wasnt enough sauce for us we would need to buy a separate coconut milk. To buy two packets it would be an expensive meal. However buying a separate milk would make the sauce more would be interesting if it takes away the spice tasting which I really enjoyed.

I would be happy to have this in my cupboard for when I want thai. The taste I feel is almost the same as my friends thai restaurant who comes from Thailand. 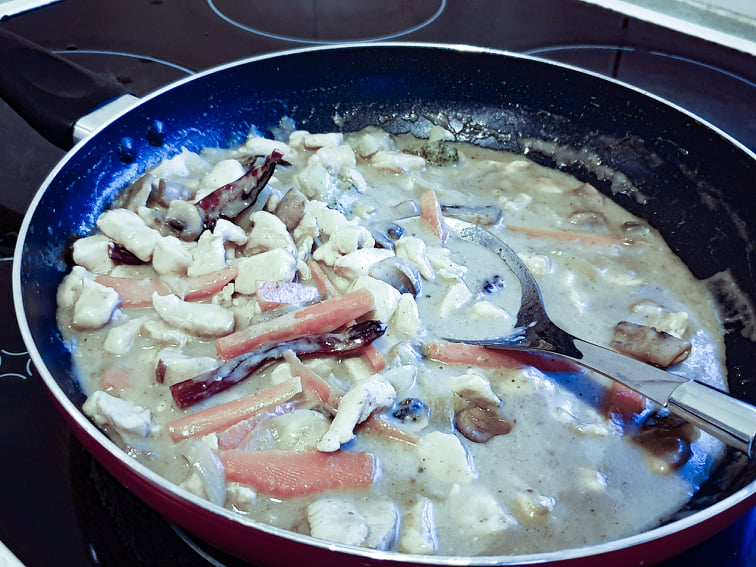 After trying the Red Thai curry variety by Street Kitchen--the variety that is meant to be the hottest--I was sufficiently put off that I felt like going back to my way of thinking; that maybe I just don't really like Thai food. But I already had this Green Thai curry sitting in the pantry, so I had little choice but to suck it up and hope that this product went a little better.

As with the other Street Kitchen products, I love the design of the packaging. The cardboard sleeve that is printed on both sides is an efficient use of space, and the foil/plastic packages fo the wet sauces and spices are not too large and see to be custom designed to minimize the packaging waste, which I definitely appreciate. The directions are straightforward and easy to follow (keep in mind you should get your rice started before beginning the meal so that everything is ready at the same time).

When I tried the Red Thai Curry, I noted that there was no heat from the spices and a complete lack of lemongrass flavour. This Green Thai Curry does have a much more fragrant flavour. With the coconut and coriander coming through. There is still little to no heat coming from the spices, however. What the coconut milk seems to do, is to completely neutralizes the heat from the chillies, and gives the sauce a very sweet flavour, not dissimilar to comparing the sweetness of a butter chicken to a jalfrezi or rogan josh.

Compared to the Red Thai variety, the Green Thai Curry had a much more authentic flavour and was much more palatable. To fit with my own tastes, it still required a fair amount of additional seasoning and chilli to get the zing and kick that I look for in a curry. But still, it was a bit too sweet to be something that I would consider eating regularly. The quantity that I also got from the meal would really only cover two meals, rather than 3-4 servings unless I went way overboard with the veggies and rice, and then the sauce would be out of balance.

This is still a good affordable meal pack though, and for those that aren't cooking for the whole family, or have a limited amount of time and space to prepare meals, this Street Kitchen meal would be an easy fix for them. 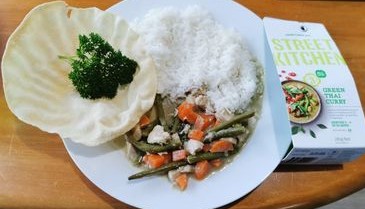 Green curry has long been one of my favourite dishes. However, there are many variations on the original, depending on what spices and other ingredients are included. I decided to follow the directions on this package to the letter - even down to the choice of rice - so that my result would be as close as possible to the manufacturer's intentions. We had chicken and green beans already in the freezer, so all I had to buy was a carrot.

Three of us were to share this meal, which made things interesting. Mr 17 likes his curry hot. The spicier the better - in fact, he is currently growing his own ghost peppers! My partner is the precise opposite, preferring a very mild, aromatic dish. And I guess I am somewhere in the middle as I like a reasonable amount of heat but certainly not enough to make me lose my voice in mid swallow.

In the end, we all enjoyed it. It was certainly milder than we had expected; after tasting it, Mr 17 added some hot chilli sauce. My partner and I, however, were quite happy with it as it was - neither too hot nor too mild, and the green curry taste was authentic, much to my delight. I served the dish with a papadum apiece, which made the dish look quite special as the papadums cooked themselves into a fan shape in the microwave.

The dominant flavours for all three of us were the lemongrass, coriander and coconut - three of my top favourites in many different recipes. It was also a bonus to find that the curry was just as nice cold, served with a piece of naan bread to mop up the juices. I would not have thought of eating it like this, but there was some left over and it was not worth reheating it. The liquid sauce had thickened slightly as it cooled which meant it stuck to the naan bread better.

It was an added advantage that this dish could be prepared in just 20 minutes. This is a huge plus when people are working or studying and arriving home at different times. There is no waiting for hours which of course happens when a dish is prepared from scratch. I like the compromise of having a meal partially prepared so that I just have to add the final touches.

Mr 17 will be in his first year at university next year, and will hopefully be going flatting, so this is a dish he would enjoy preparing because it is so quick and easy. It is all too common for young people leaving home for the first time to rely on fast food because they can't be bothered cooking. As he said, kits like this will mean the difference between eating sensibly and grabbing whatever can be sourced quickly. If the kits are already on hand, all he has to do is to organise the meat and some vegetables.

Tub was started in 2011 after eight months of intense research & development into making the perfect spoonable fudge. The idea came about of making an instant dessert after finding most store-bought ready made mousses weren't anywhere near home-made quality. Fudge is very stable, doesn't have to be stored in a refrigerator and doesn't require intense synthetic preservatives to last for months on a shelf. Also available in gluten-free options.

Pricing based on a 180g tub