Petals in the Wind review 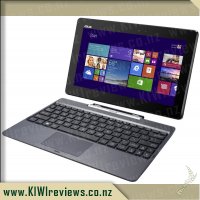 Disclosure StatementFULL DISCLOSURE: A number of units of this product have, at some time, been supplied to KIWIreviews by ASUS or their agents for the purposes of unbiased, independent reviews. No fee was accepted by KIWIreviews or the reviewers themselves - these are genuine, unpaid consumer reviews.
Available:
at selected quality retailers

2-in-1 ultraportable laptop with 10" tablet
•  Windows 8.1 Pro or other editions available
•  Small and light, with an Intel quad-core processor
•  Comfortable keyboard dock and IPS display
•  Up to 11 hours battery life for all-day mobile use

Not the cheapest tablet on the market, the T100 is still a significant contender because of it's good size, multi-touch screen, and a sturdy pedigree behind it. Add to that the keyboard that allows it to function as a compact laptop, and you have a very versatile device with the ability to go anywhere and be used in a wide range of settings, both personal and commercial. While this will never out-perform a laptop, the keyboard attaches with a sturdy and secure hinge clamp that provide three fixing points for durability and assurance that you won't cause it to break apart just by sneezing hard.

Unlike many other ASUS tablets, this unit runs Windows 8.1 - for some, this will be the deal killer, while for others it will signal superior functionality and the ability to run software that can be carried across to the more powerful laptop for smoother workflow. While I personally consider Windows 8.x to be the second biggest mistake in the history of operating systems, I have to admit that on this platform - small-screen portable devices - it does come into it's own. I still prefer Android myself, and while I would love to see this hardware running that OS, I have to hesitantly admit that Win8 doesn't utterly ruin my experience using this. At least I can download and run Firefox on this!

Keeping the weight down to make the tablet component as light as possible means ditching almost all of the metal used in many sturdier tablets. Being almost entirely plastic - with the key exception of the hinge, which has a significant proportion of metal for structural sake - the entire unit weighs in at a surprising 1.11kg, with the keyboard base making up only slightly less than half of that. With the screen and keyboard being of almost-equal weight, stability on the flat solid surface is very good, and on one's knees it's... well, better than many others, we'll say. I am still not a fan of trying to type on something balanced on my thighs, preferring instead to MacGyver up some kind of lap desk or small table.

Speaking of the hinge, I have to compliment ASUS on the design and construction. Utterly hassle-free to use, you simply line up the table against the hinge, and a gentle press is all it takes to lock the two units together into a surprisingly strong grip. The hinge then acts as one seamless unit, with no obvious signs of 'wobble' as I have seen in some other apparently high-end devices, where there is significant movement of the tablet portion inside the hinge clasp. To release the table, pressing a single obvious button and the tablet will slide free smoothly, almost as though it was never really held in place at all. An excellent piece of UX designing, there.

The keyboard has only one negative, and that's the trackpad. With all the years of development, it still surprises me how such a mature technology can be so improperly designed. The trackpad is a little awkward to use, has responsive lags, and sensitivity issues that make it flip between hyper-sensitive and almost insensate, meaning you spend half your time trying to get the cursor to move, and the rest trying to get the infernal thing to stop click-selecting wildly. It did make me VERY grateful for the USB 3.0 port on the back-left corner, so I was able to slap in my wireless mouse, install the driver software, and make it 100x easier to use - another small reason I admit that Windows can be a good OS for these.

That's really all there is to say about the keyboard - all other aspects of it are utterly unworthy of note - neither positive or negative enough to warrant significant comment. So... onward, to the tablet half!

With the now-ubiquitous Corning Gorilla Glass, you get a very durable touchscreen to work with, and in the absense of a mouse the touch sensitivity is more than adequate enough to make this easy to use, even if you most common icons are smaller than the size of the nail on an average pinky finger. The bezel - the frame surrounding the actual visible screen area - is pretty clunky by today's standards. Far thicker than your iPads and many smartphones, it's still not so thick and ugly as to make it a style issue for most. ASUS have not been known for svelt bezels at any stage, and there's no changing their track record with this, but the screen is plenty big enough to do the job, and the tablet isn't so bulky as to be unwieldy... so... don't stress about it.

With the majority of the interface ports actually housed inside the tablet portion, going without a keyboard isn't a huge hardship really. All it denies you is access to standard USB devices, such as a mouse, external hard drive or standard pendrives. On that last front, even the smallest of these units comes with 32GB of onboard eMMC storage, and there are a growing number of pendrives hitting the market with dual plus - USB and USB-micro plugs on them. This means that very soon, extra detachable storage isn't going to be a big issue, and you may find yourself leaving the keyboard on the desk at home or work acting as more of a docking station than anything else.

Visually, this unit is a little below par in the tablet market, with a resolution of just 1366x768px - which is actually less than many smaller tablets. However, it's on par with most laptops, so considering the physical size of the screen you still end up with 155ppi. Add to that the fact this unit uses the superior IPS panel technology that greatly improves the viewing angles and you get something that is quite acceptable, if not remarkable, in a tablet of this price range. The only short-fall here is the lack of intensity - all the colours appear muted and darker than they should. It's one of the less appealing trade-offs to get this tablet into this price-bracket and undercut the more prolific iPad family.

While this unit still doesn't have the grunt of a full laptop with an Intel Core CPU, it runs a more modern and powerful generation of the Intel Atom processor and as such is capable of a lot more than previous iterations were, which is why it can run the full version of Win8 instead of a crippled version as many smartphones and earlier tablets did. This added processing power is what makes the T100 such an interesting and appealing device to those of us who are hard-pressed to be inspired by 'stylish' design and unneccesary extras bolted on or shoe-horned in. Comparing this to even a low-end laptop, it ranks just above 'underwhelming', but when you compare this to many of it's peers in the tablet genre, it ranks a just short of "Superhero side-kick" - powerful in it's own right, and a great portable companion to a more powerful workstation. Be aware though that with only 2GB of RAM, larger applications may be slow to load and it's still not going to let you crank up the settings on World of Warcraft.

Battery life is nothing short of amazing for a tablet of this power. The specs say 11 hours, but our testing saw it shuffle past that with an average run-time of 11 hours and 48 minutes across a range of usage tests. Watching movies over a WiFi connection naturally hammered the battery resulting in the lowest time of 9 hours and 16 minutes, while low-power tasks such as reading a downloaded eBook gave us the best time of almost 12.5 hours.

While watching the movies, I did happen to notice the sound quality - unremarkable, but not too shabby for a mid-range tablet. The speakers are located on the back edges, and you can see them if you look for the two rows of tiny holes drilled in the short edges. While the sound does tend to 'leak' in any tablet - there's not really much room for insulation and sound-channeling architecture in tablets - it was still acceptable if a little light on the bass... because, you know, I'm all about that bass.

Camera-wise, I really am sorry to say that this tablet has let itself down. Only one, forward-facing, camera, and a piddly 1.2mp one at that. I don't want to really rag on this because while it is a really shoddy offering, the tablet overall is pretty decent if not stunning. But seriously ASUS... throw in a better camera, even if you have to only stick with one. Anything less than 5mp is just tugging the goat's tail - it WILL turn around and bite you.

Overall, this is not going to suit the 'popular' crowd, who want to take shining selfies and send them whizzing around the world on their facetubes. However, it will suit the more practically-minded who are more interested in staying in touch with the office while out and about. On that front, you can easily pair it with your phone via Bluetooth or WiFi Tethering, if you aren't in range of an open WiFi Access Point, and once you have done that you should be happily churning data and swapping notes with the team in minutes. For the price, this is a strong contender for a 'work' device rather than a 'social' device.

The Seagate Barracuda 7200.10 desktop hard drive features innovative perpendicular recording technology and is the first drive on the market to provide capacities up to 750Gb. Barracuda 7200.10 hard drives deliver superb performance, efficiency, speed and durability for all your application needs.